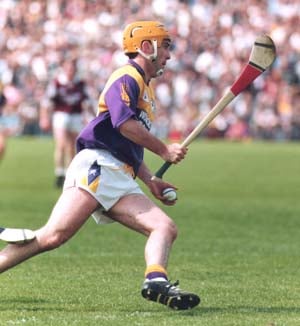 Liam Dunne
Well 'Dunne' Liam! Wexford and Oulart - The Ballagh's classy Half Back Wins All-Star Award ooking back on the performance of the Wexford Senior hurling team last year two outstanding memories spring to mind immediately - the first came in New Ross last March when Jimmy Holohan pointed direct from a last minute '65 to guarantee our place in the quarter-final and consign Galway to Division Two; the second occurred in Parnell Park during the current campaign when a magnificent solo run by Dave Guiney deep into Dublin territory lifted Wexford spirits and helped us to a well deserved victory. However, the displays by one team member throughout the year far outshone those memories - when I look back on 1990 in the future, I will remember it for the sustained excellence of gifted wing-back Liam Dunne, who had a memorable season. He came into the side as a virtual unknown outside the county at the start of the 1989 - '90 League campaign, but is now a household name wherever hurling is discussed. The clever shimmy, the pinpoint crossfield pass to club colleague Martin Storey, the tight marking - there are all facets of Liam's play which we have grown to know and love. Yes indeed, Liam Dunne was a deserving winner of the All-Star award, becoming one of the small band of hurlers to win the coveted accolade in his first full year of the Co. team. Liam's distinct promise first came to the fore in his days attending Oulart National School. The 22-year-old star won two Rackard League titles with the school in 1977 - '78 and 1980-'81 respectively, and went on to capture a Slaney Hurling title with Oulart - The Ballagh. He first donned the County jersey at Under-14 level and won his first provincial title with the Wexford team that captured the Leinster Under-16 blitz title in 1983. 1985 was a memorable year for Liam - he earned a place on the Co. Minor panel, and won Leinster and All-Ireland runners up medals as a substitute. He was back again with the Wexford Minor team the following year, lining out at midfield on a side that lost heavily to Offaly in the provincial final. However, Liam's display on that disappointing day was so impressive that he was immediately called up for the Co. U-21 panel, and he went on to win his second All-lreland runners-up medal as substitute on the team that lost to Galway in the decider at Thurles. It was the beginning of a four-year association with the Wexford Under-21 team for Liam. Meanwhile, his club were making a big impression on the under-age scene in the county, and the talented performer spearheaded their success in the 1987 Co. Under-21 hurling Roinn 1 final. He had earlier won a Leinster Under-21 medal with Wexford, but the team fell badly to Galway for the second year in succession, this time in the All-Ireland semi-final in Tullamore. 1988 will be remembered as they ear in which Liam made his Senior inter-county debut. He was a somewhat surprise choice on the Wexford team that faced Laois in the first round of the Leinster championship at rain-soaked Nowlan Park, but performed adequately in the middle of the field. Later that summer he travelled with the Ireland team to Iverness where they played Scotland in an Under-21 hurling/shinty game - he figured again on the Irish team the following year when the return game was held in Croke Park on Leinster Hurling Final day. And so to 1989, the year in which Liam ready made his mark. He was simply superb for Oulart-The-Ballagh at centre-back throughout the championship campaign as they marched confidently to their first County Senior final in seven years. His excellent leadership qualities, economical use of the sliothar, and long-range point-taking immediately attracted the attention of Wexford's new selectors - Martin Quigley, Dave Bernie and , Jimmy Furlong - and the rest is history, as they say. Liam was the undoubted star of the Wexford team last year, performing with style - it came as no surprise therefore, when he won an All-Star award. Employed as a joiner with Andy Roche of Blackwater, Liam is a man of many talents, - as well as his hurling prowess, he is an accomplished handballer, having won many county and Leinster titles. He is also widely acknowledged as a hurley-repair-man of high renown, and is an attacking corner back on the football field, winning a Co. Junior "B" medal with Oulart-The-Ballagh in 1988. Liam's sporting prowess seems to run in the family. Growing up in the family homestead in Kyle, Oulart, he regularly practiced the skills with his older brothers, Tomas and Sean, both of whom have lined out with Wexford at Senior level. Meanwhile, his three sisters are all leading members of the Oulart-The-Ballagh camogie team, and the best-known of the trio - Siobhan - was a dual star with the Wexford Senior Camogie and Ladies Football teams in 1990. An outstanding hurler on the field, and a perfect gentleman of it, Liam is the ideal role model for the many youngsters who admire his whole hearted approach in the purple and gold. Wouldn't it be marvellous if he could add an All-Ireland Senior medal to his vast medal haul in 1991. Taken from Hogan Stand 10th May 1991 Vol 1 No 8 Tweet