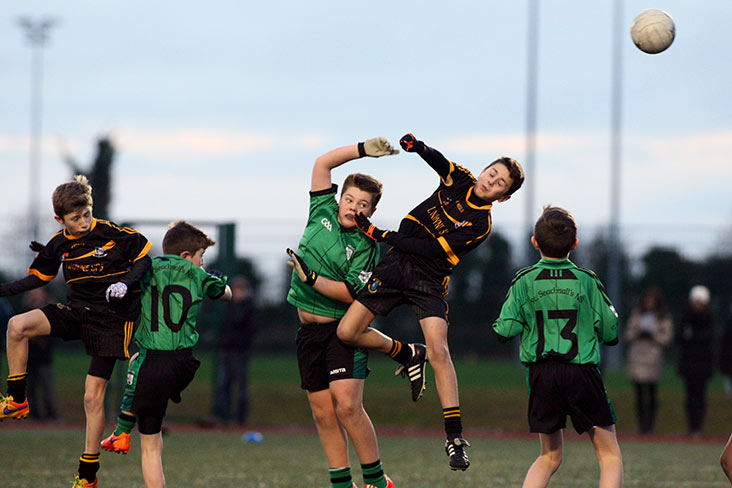 St Seanchall's full forward Christophre Pullen flicks the ball to the Dunboyne net for his opening goal. TO VIEW A SELECTION OF PHOTOGRAPHS FOR THIS GAME CLICK HERE

The game opened with a flurry of goals. Dunboyne were first off the mark when Martin Campbell finished to the Seachalls net. The Dunshaughlin school began to work their way in to the game. The outstanding Conor Gray along with John McDonagh and Alex Arkins Flinters dominated possession and full forward Christophre Pullen was their target man on most occasions. The number 14 hit four goals inside ten minutes to stun the 2014 champions.

With 15 minutes gone the boys in Green and Black led 4-0 to 1-0. This spurned Dunboyne into action and they reeled off three points without reply through Simon Cunningham (2) and captain Dylan Vaughan. In reply St Seanchalls raised two white flags from Adam Kelly and McDonagh before Dunboyne brought themselves right back in to the game. Thomas Lonergan got in for a well worked goal and Vaughan followed up with a point to cut the deficit to 4-2 to 2-4.

But the eventual winners finished the half the stronger and were rewarded with fine points from McDonagh and Fursey Blake to go in at the break 4-4 to 2-4 in front.

The second half proved a low scoring affair with most of they action between the two 40's. Ghemi Arubi extended St Seanchalls lead after five minutes with a well worked point. Sean McHale threw Dunboyne a life line with their third goal after ten minutes but that was to proved their only score of the half. St Seanchalls  defence was solid and two points in the last five minutes from half back Kyle O'Connor and Blake sealed the issue in their favour