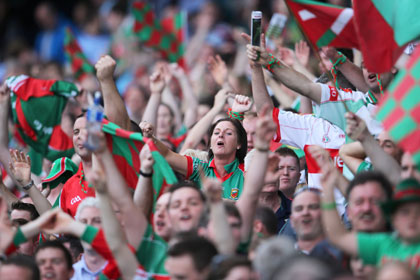 Mayo supporters are sticking by their team
Mayo chairman Paddy McNicholas has called on supporters to help make a double success.

McNicholas has urged the county's supporters to travel to Croke Park in force to cheer on both their minor and seniors in their quests to reach the All-Ireland finals.

Mayo have never had two teams in Croke Park on All-Ireland final day and it's been 14 years since they had both teams playing on semi final day.

But McNicholas feels that the supporters can play their part in achieving a unique double on Sunday week, August 25th.

"We can close to achieving it last year but we have the opportunity again and it's important that we do all we can as supporters to help make the dream become reality," McNicholas stated to the Western People.

"I'm calling on all Mayo supporters to get into Croke Park well before the start of the game. We've seen it all too often in the past, where fans only arrive for the last ten minutes of the 'curtainraiser', but there are no excuses this time. As a county we should try and make the most of this wonderful opportunity that's before us." Tweet