Mortimer ruled out for six weeks 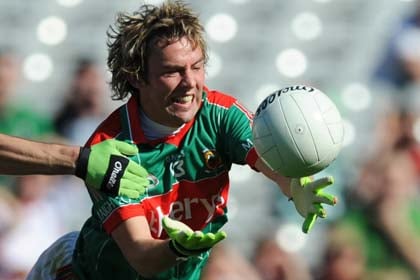 Mayo's Conor Mortimer
Mayo have been rocked by the news that Conor Mortimer will miss the Connacht SFC opener against New York at Gaelic Park on May 10 through injury. The star forward broke two bones in his right hand during last Sunday's drawn NFL clash with Tyrone in Castlebar, and will be sidelined for at least six weeks. However, given the fact that he doesn't require surgery, he should be back in plenty of time for a likely provincial semi-final showdown with Roscommon or Leitrim on June 20. Despite suffering the injury after 15 minutes, the Shrule-Glencorrib clubman played on for the rest of the game, and it was only after he had x-rays on Sunday evening that the full extent of the damage was revealed. "I think I may have picked up the injury pushing myself off the ground and putting pressure on the hand," he said. "I knew there was something broken but I played on and went for an x-ray after the game. "I will be out for six weeks I would estimate, but I will still be able to participate in some training, although not the ball work obviously. It's an unfortunate blow because I felt we played well on Sunday." Tweet