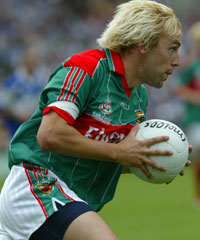 Conor Mortimer Mayo
Conor Mortimer has revealed his disappointment at missing DCU's O'Byrne Cup encounter with Kildare on Sunday, but expects to be fit for Mayo's NFL opener against Derry in a fortnight's time. Mortimer sustained a broken nose in the victory over DIT last weekend and a scheduled operation was postponed during the week. He will certainly miss the semi-final encounter with the Lilywhites but hopes to be back at full tilt in time for Mayo's NFL opener against Derry on February 1st. He said: "I went to the surgeon on Thursday hoping to have the job done but I was advised to come back as the swelling needs to go down more. That was a disappointment. "There's nothing I can do but I'm confident I'll be fit for the start of the League and also for the Sigerson Cup clash with Sligo IT." Tweet