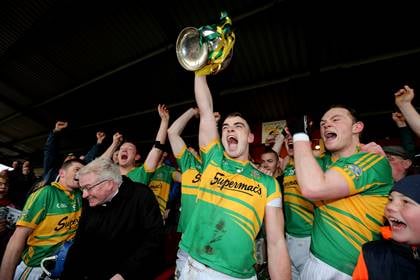 A replay looked to be on the cards when a Kevin Hayes goal brought Portumna level with two minutes of normal time remaining, but Gort hit back with two goals in the space of a minute to be crowned county champions for the first time since 2011, and set up an All-Ireland semi-final meeting with Kilkenny's Ballyhale Shamrocks next February.

Portumna, whose last competitive game was their semi-final win over Craughwell nine weeks ago, opened the scoring through a Joe Canning free, but a brace of Richie Cummins points had the winners ahead by the 10th minute.

Canning was on target from play before Greg Lally restored Gort's lead from a free. Ronan O'Meara had the sides level on 0-3 apiece at the end of the opening quarter. Gerry Quinn (free) and Canning traded points before three-in-a-row from Aidan Harte, Paul Killilea and Quinn gave the south Galway men a 0-8 to 0-4 buffer. Quinn's third free had them five ahead at the short whistle.

There was no sense of panic on the champions' part as they resumed with points from Damien Hayes and their veteran captain Ollie Canning to reduce the gap to two by the 38th minute.

However, with Quinn notching four more points from placed balls in the second period, Gort had re-established a three-point lead entering the final stages.

A dramatic finale unfolded as first Hayes netted to restore parity for Portumna and Walsh immediately replied with a similar score at the other end. And before Portumna could recover from that setback, Mullins had the net bulging for a second time to secure victory for Mattie Murphy's charges.