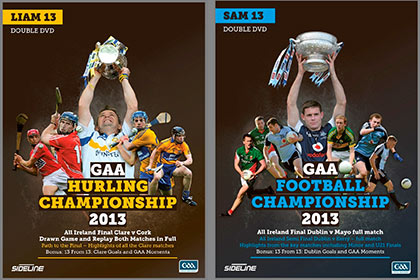 On the shop shelves now
LIAM 13
LIAM 13 brings you over 5 hours of action from the 2013 GAA Hurling Championship on a double DVD.

It was an outstanding championship year. Not only did we see a changing of the guard but we were treated to some of the best matches in many years, culminating in a final that truly endorses the claim that 'hurling is the greatest field game in the world'. In a sense the championship was looking for a year like this.

- Clare play 8 matches to eventually win a dramatic final after a replay
- Young teams and teenage hurlers take the limelight
- Limerick are 'Kings of Munster' for first time since 1996
- Dublin win Leinster for first time in 52 years
- Waterford Minor Hurlers bridge an even longer gap of 65 years
- Kilkenny play 6 games but the Dubs and the Rebels halt their run
- Tipperary have a dismal campaign - played 2 lost 2
- Clare score 13 goals in the 2013 championship (as did Dublin in the football)
- Hawkeye creates a 'Specsavers' moment of controversy
- Clare make it a double with the U21 title
- And who will forget the sight of Cork keeper turned poacher as he scores a blaster of a goal against Clare. Awesome!

LIAM 13 - a double DVD with over 5 hours of top class action: THE FINAL draw and replay, both matches in full. Highlights of other key matches, Clare's Road To The Final - highlights of all their matches, Highlights of Minor and U21 Finals, "13 from 13" - Clare's 13 goals, 13 Great Memories from 2013 GAA Hurling & Football Championships.

SAM 13
SAM 13 features over 5 hours of action from all the top matches of the 2013 GAA Football Championship.

The main headline of the 2013 GAA Football Championship will be Dublin raising Sam for the second time in 3 years. Under new manager, Jim Gavin, the Dubs had an outstanding 'triple crown' year as they also won the National League and retained their Leinster title. That might read like it was a championship that went as expected without drama and excitement but nothing could be further from the truth. It was, in fact, one of the most memorable championships in years, producing some of the best fare and more than its share of shocks and surprises.

- Dublin win a 'triple crown' - League, Leinster and All Ireland champions
- When the final whistle blew on the year just 1 point separated the winners from the runners-up
- Mayo's record of defeating reigning All-Ireland champions continues for third successive year
- Monaghan end a 25 year wait for an Ulster title
- Kerry win their 75th Munster title
- Reigning champions Donegal lose their Ulster title on 21 July and 2 weeks later lose heavily to a rampant Mayo in a quarter final
- Dublin and Kerry deliver a classic - a 6 goal thriller of a semi-final - and one of the all-time great matches
- London footballers have a fairytale year reaching their first ever Connacht final
- Mayo minors salvage some reward for the county with a first title since 1985
- Dublin core 13 goals in the 2013 championship and by coincidence so did hurling champions Clare

Sam '13 and Liam'13 are available in all major DVD stockists nationwide and from online sellers such as www.dvdsales.ie . Tweet