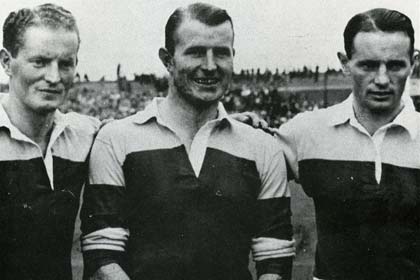 The Rackards from Wexford Bobby (left), Nicky and Billy
Wexford GAA is mourning the death of the legendary Billy Rackard, who was one of the stars of the county's great hurling side of the 1950s. One of the famous trio of brothers along with Bobby and Nicky (whom the third tier hurling championship is named after), Billy died last night at the age of 79 following an illness. Lining out at corner back, wing back and centre back, Rackard played alongside his brothers on the Wexford team that won All-Ireland titles in 1955 and '56. He won a third All-Ireland in 1960, thus surpassing the tally of his brothers. Billy also captained the Model County side that lost the 1962 All-Ireland final and won two National League medals in 1956 and '58. Tweet