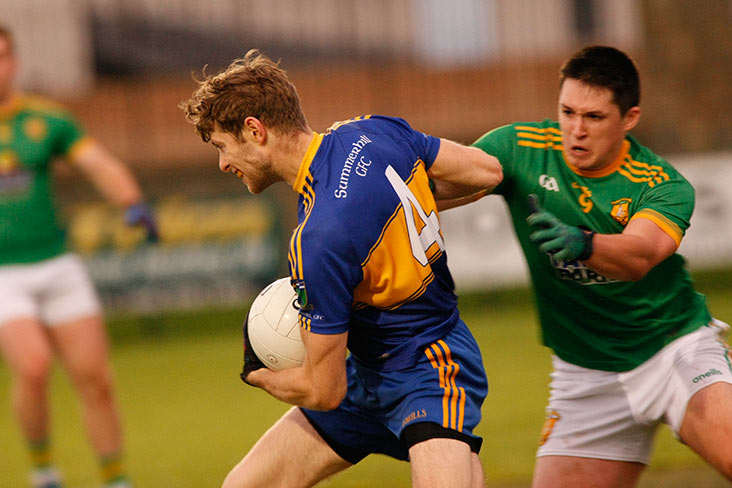 John Lavelle's 51st minute goal was pivotal in Summerhill's narrow win over gutsy Curraha in this SFC round three fixture at Ashbourne on Friday evening.

Lavelle also scored the late goal that saw Summerhill leapfrog Wolfe Tones last time out. The outcome had no bearing on the final group placings but the workout may prove useful to both teams in their imminent but different challenges.

In a poor game with mistakes abundant, Summerhill finished strong - to register their third win of the campaign. Curraha had four different scorers while the 'Hill had eight.

Points from Liam Shaw and Ross Ryan either side of the second-half water break restored Summehill's lead, leaving the board reading 1-7 to 2-3.

Five minutes later Lavelle steered the ball to the net to finish off a fine move during which Conor Frayne's goal attempt was blocked.

With a 100% record in the group stage, Summerhill are mounting a challenge to win the title while Curraha - on foot of their third defeat of the campaign - are battling to retain senior status gained on foot of their IFC win in 2017.

Under the floodlights, Curraha outscored Summerhill by 0-3 to 0-1 in from the 53rd minute but couldn't create enough to salvage something from the fixture.

Summerhill would have won by a wider margin but for the efforts of Curraha's sub goalkeeper Luke McCarthy who was introduced at half-time. His 42nd save from Frayne was a highlight as was his stoppage time stop from John Keane.

Jack O'Connor's 14th second goal - following a delivery from the impressive James McEntee - was an early tonic for Curraha.

Both sides were wasteful in the first-half with Summerhill posting eight wides to Curraha's five.

The rest of the half was below par and ended with Summerhill leading by 1-3 to 1-2 at the break as two Sean Keogh points kept Curraha in contention.

Eighteen seconds after the restart O'Connor levelled matters with a point. Two minutes later he restored Curraha to pole position with a goal at the town end. Diarmuid Moriarity assisted to leave it 2-3 to 1-3.

Just as in their wins over Moynalvey and Wolfe Tones, Summerhill responded positively to adversity. This time posting 1-4 without reply between the 38th and 51st minutes.

Both teams made substitutions. Some seemed to done with an eye to future challenges. While the quality on show may not have been great, the spirit shown by both sides may prove invaluable in challenges ahead.