Dublin advanced to the O’Byrne Cup final after scoring their third win of the competition earlier today against Longford.

The Leinster champions were comfortable in a 0-16 to 0-5 victory at Pearse Park, where James McCarthy, Eoin Murchan, Ciaran Kilkenny, Brian Howard and Paddy Small all started for the visitors.

Former U20 star Ciaran Archer contributed two points in the capital men’s victory while Kilkenny top-scored with 0-4 for the Group A winners.

In Ardee, both Offaly and Louth left the number 23 free as a mark of respect to Ashling Murphy, who was murdered in Tullamore on Wednesday.

Play was also halted at the ground in the 23rd minute to remember the musician, camogie player and primary school teacher.

Having led by 0-6 to 0-4 at the half, the visitors conceded two goals from Leonard Grey and Ryan Burns after the turnaround but still managed to win out by 0-15 to 2-6 to finish as Group A runners up behind Dublin.

In Crettyard, Laois struck back-to-back goals in the second-half to see off Wicklow’s challenge and set-up a semi-final date with Kildare on Wednesday night.

The visitors put up a strong challenge and looked like leading at half-time until late points from Ross Munnelly and Paul Kingston sent Laois in with a 0-11 to 1-7 lead.

It was tit-for-tat throughout from the start of the second-half until Sean Moore and Evan O’Carroll struck goals in the 25th and 27th minutes respectively to shut out the Garden men.

The day’s later game in Ashbourne saw Andy McEntee’s Meath side 1-15 to 1-10 winners over Wexford.

Jordan Morris’s goal on the quarter hour mark sent the Royals in at the break leading 1-3 to 0-5 and, while the hosts increased their lead to four, Wexford pulled a goal back through Ben Brosnan with 15 minutes to go. 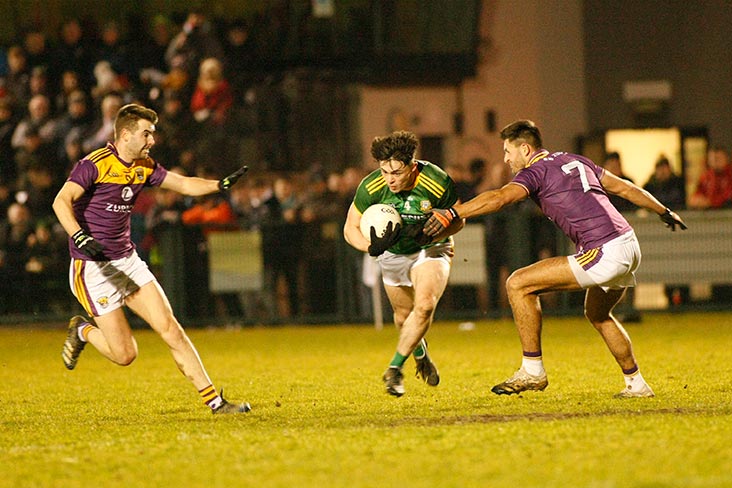 The Slaneysiders couldn’t get level though as points from James Conlon (2), Cathal Hickey and Donal Keogan steadied the home side’s ship to win out by five in the end.

With the Model men losing in Ashbourne, Laois and Kildare now contest the competition's semi-final this Wednesday night to see who will face Dublin in the final next Saturday, January 22nd.