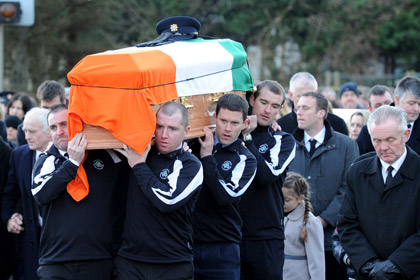 Crosserlough GFC in Co Cavan remembered the late Adrian Donohoe yesterday after the 28-week trial to convict his killer came to an end.

Aaron Brady was found guilty of the capital murder of Detective Garda Adrian Donohoe, who died on January 25, 2013, and is now set to be sentenced on October 14th when victim impact statements will be heard.

A former Cavan underage player who played with his native Crosserlough, Adrian went on to represent the Lordship club as a player and coach when he moved to live in north Louth.

Crosserlough GFC tweeted after the trial verdict yesterday in remembrance of Adrian Donohoe.