The last time Meath and Fermanagh met in the NFL 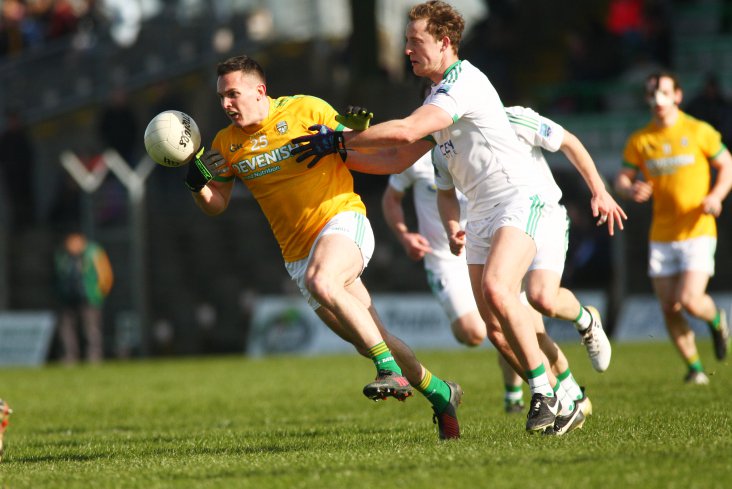 Meath maintained their bid for an Allianz NFL Division 2 final spot with an emphatic win over Fermanagh at Pairc Tailteann on Sunday March 26th 2017.

Two first-half goals, when playing into the wind, set Meath up for their third home win from six league outings.

Donal Lenihan (penalty) and Bryan McMahon got the goals that boosted Meath to a quadruple scores win over Fermanagh. They left Meath eight points to the good at the break.

All bar one point of Meath's tally came from play with Sean Tobin bagging the third to leave it 3-9 to 0-4 after 50 minutes.

Seconds later, Fermanagh got the first of two second-half scores, from Lee Cullen. The Erne County's final flag was posted in the 63rd minute from an Eddie Courtney free

Fermanagh faced the sun in the opening 35 minutes but had the wind, blowing from the town goal, at their backs. Sean Quigley pointed Fermanagh in front from a 45-metre free in the third minute. Seconds later they doubled their account with a Ryan Lyons effort from play with assistance from Lee Cullen.

Graham Reilly got Meath off the mark nine minutes in. They tagged on 2-2 without reply before Fermanagh added to their tally.

Kane Connor and Quigley (free) were the scorers for the visitors in the remainder of the half.

A forward surge by Donal Keogan led to a foul on Cillian O'Sullivan. Donal Lenihan tucked the penalty to the right of Fermanagh 'keeper Christopher Snow and Meath hit the front 15 minutes in, 1-1 to 0-2.

Bryan McMahon set Lenihan up for a great point while Meath moved four clear, 1-3 to 0-2, in the 20th minute when Bryan Menton registered.

Things got even better for Andy McEntee's men in the 23rd minute when Bryan McMahon goaled with help from Graham Reilly. Coming up to the half-hour mark Fermanagh doubled their tally with points in quick succession from Kane Connor and Sean Quigley (free).

Meath closed out the half with a trio of points. James Toher opened the sequence from a close range free with Graham Reilly and Bryan McMahon completing the hosts first-half tally. The latter score a classy effort that left it 2-6 to 0-4 at the break.

In the final round of games next Sunday, Meath travel to Clare while Fermanagh entertain Derry.