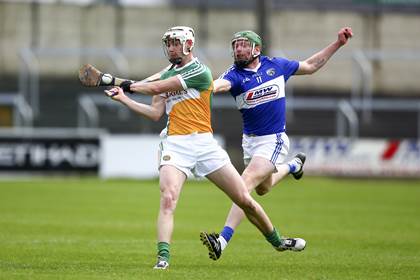 Laois surged to an incredible 0-29 to 0-21 victory over Offaly at Portlaoise today to book a semi-final meeting with Galway.

Incredibly, the O'Moore County reeled off eight unanswered points to take a 0-14 to 0-10 advantage into the break, having played with wind assistance, and kicked on in the second half to register their first championship victory over Offaly since 1972.

Points from Shane Dooley and Dan Currams had propelled the Faithfuls into a 0-10 to 0-6 lead after 25 minutes but - with 6,534 looking on - Seamus Plunkett's men finished the half superbly as scores from Zane Keenan (3), Cha Dwyer (2), Eoin Kelly and Willie Hyland (2) turned the game on its head before the short whistle.

Keenan top-scored for the winners with an eleven-point haul, while Dooley was on target ten times for the losers, who could never get back into contention after that devastating O'Moore County flurry at the end of the first half.

With Hyland and Dwyer nailing twelve points from play between them, this was a truly fantastic display from the winners, who have reacted superbly to the timely return of their manager Plunkett during the week.