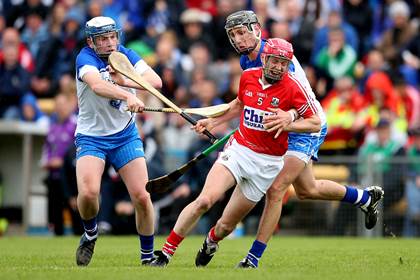 An excellent display by Waterford saw them defeat Cork by 1-24 to 0-17 in today's NHL final played at Semple Stadium.

From start to finish, Waterford were the better team and they had some excellent displays throughout the team right from goalkeeper Stephen O'Keeffe who made two top class saves, one in each half to deny Cork at crucial times of the game.

Austin Gleeson really stepped up to the big stage with an outstanding display at centre back, chipping in with two excellent points, while old heads like Michael Walsh and Kevin Moran certainly led by example.

For Cork, there will be a lot of head scratching after this one as they missed a lot of scoring chances, while they couldn't match Waterford's intensity and they will have it all to do again in three weeks' time.

Waterford lead by 0-11 to 0-07 at the break as Pauric Mahony showed his class from frees once again. Many felt that Cork would push on in the second half, but Waterford were not to be denied as they kept the pressure on and when Tom Devine's shot trickled over the line in the 64th minute, there was ten points in it and no way back for Cork.

Waterford made a fast start to the game as they went into a 0-03 to 0-00 lead by the third minute. Mahony pointed a '65 before the same player swept over a point from play. And Shanahan then showed a great turn of pace to find room and tap over.

Pat Horgan opened Cork's account in the sixth minute and he was on target from another placed ball just a minute later.

Michael 'Brick' Walsh made it 0-04 to 0-02 by the eighth minute, but Horgan had it back to a one point game moments later, when he pointed his third free.

Then Gleeson stepped up to take a line ball from 40 metres and split the posts with a tremendous effort. This lifted Waterford and Mahony (free) Jamie Barron and Kevin Moran from play stretched Waterford's lead.

It took until the 18th minute for Cork to get their opening point from play as Conor Lehane turned and fired over the bar. Rob O'Shea followed that up with a fine point, 0-07 to 0-05.

Gleeson produced his second piece of magic when he gathered a high ball, soloed 60 yards, sold a dummy hand-pass and fired over a point off his stick from 50 metres.

Bill Cooper and Horgan (free) pulled points back for Cork, but two more frees from Mahony brought the first half scoring to a close.

Horgan and Mahony exchanged frees at the start of the second half, before Lehane and Stephen Bennett did likewise two minutes later.

Aidan Walsh who had a quiet afternoon by his standard and was later substituted, sent over a point, but Waterford hit back with points from Mahony (two) and Shanahan.

Lehane and Harnedy pulled two points back for Cork, by the 52nd minute, before Moran and Mahony (free) did the same at the other end.

By this stage, Waterford were well on top, even though Lehane was the next to score. Further frees were exchanged by Mahony and Horgan, before Devine's goal in the 64th minute.

Brick Walsh pointed to a great cheer as Cork tried to rally, but it was not to be as Waterford lift the title for the third time in their history.