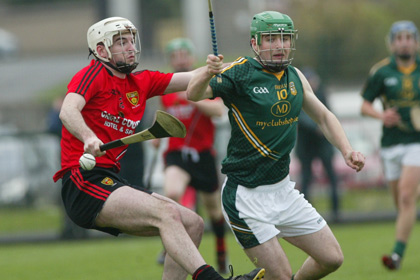 Down's Malachy Conlon with Meath's Willie McGrath during the opening round of the Christy Ring Cup at Trim
Meath fended off the challenge of holders Down in this Ring Cup opening round fixture at Trim on Saturday afternoon.

With the suspended duo manager Cillian Farrell and selector Kevin Dowd taking a keen eye on proceedings from the clubhouse, Meath were never headed over the course of the 70 minutes.

Down looked to be in a strong position at the break having reached the interval on level terms with Meath, who had the elements in their favour in the first 35 minutes.

After the change of ends, Meath outscored Down by 0-9 to 0-3. The Royals - with Trevor Cummins and Nick Fitzgerald at the helm - were never reeled in after Stephen Clynch posted his first point from play in the 38th minute.

A great Caoimhin King effort doubled Meath's lead. The Royals outscored Down by 0-6 to 0-2 in the third quarter with some top notch scores including a second from Stephen Morris. Two Willie McGrath efforts in quick succession around the 50th minute left four points in it, 0-13 to 1-6 for the first time.

Meath conceeded just nine scores and credit goes to a tenacious defence including teenage goalkeeper Charlie Bird, whose fielding was a feature of the game.

Down 'keeper Stephen Keith wasn't as busy as Bird. A long range free from centre-half-back Conor Woods left just four in it, 1-8 to 0-15, by the 67th minute. Meath closed in on a place in the next round with points King and Cynch(free).

Backed by a slight breeze blowing into the town goal the hosts took the game to the holders from the off and by the 7th minute had three points on the boards thanks to Stephen Clynch (two frees) and his Kilmessan clubmate Darren Reilly.

Down responded in like manner and points from Paul Sheehan, Scott Nicholson and Daniel Toner levelled matters for the first time, in the 14th minute.

Over the next 10 minutes the teams were tied on two further occasions with Stephen Morris' 19th minute point from the left wing being the pick of that quartet of scores.

Meath opened up a three-point gap with as many scores in quick succession just after the half-hour mark. Two Clynch pointed free and an excellent James Toher effort from distance made up that trio of scores.

The clock had just ticked into stoppage time when Down struck for goal with Toner netting from close range after Scott Nicholson's long delivery broke to him.

Meath hit 11 first-half wides (Down had five) as the holders headed for the dressing room with on level terms (0-8 to 1-5) with the side they beat in last year's semi-final, in a replay.

For Down a place in the second chance saloon beckons, from where they will bid to claim outright honours in the second tier championship, just as they did a year ago when they were outright winners of the competition for the first time.

Meath efforts were appreciated by their supporters who roundly applauded them off the well-prepared pitch.