Nolan honoured to play for Ireland 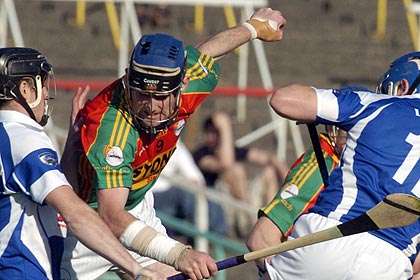 Carlow's Eoin Nolan gains possession against Laois
Carlow hurler Eoin Nolan admits that it was a huge honour to line out for Ireland in last weekend's narrow defeat to Scotland in the Shinty international at Croke Park.

Nolan lined out at centre back and was flanked by Kilkenny duo Jackie Tyrrell and Tommy Walsh as the Scots held a one-point win at the final whistle, which they will carry into the second test next week.

"It was a great honour to pull on the jersey of your country and a nice honour to play in Croke Park," said Nolan. "It was a good experience to play with some of the players from some of the stronger hurling counties. It is not too often that you get to line out with lads of that calibre. It still is within reach when we get back over there." Tweet