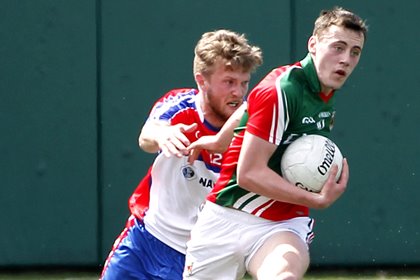 Four second half goals paved the way for a comfortable 22-point win for Mayo in the opening game of the 2014 Connacht SFC at Gaelic Park in the Bronx this evening.

Cillian O'Connor bagged 2-5, with his brother Diarmuid, and substitute Enda Varley on target with Mayo's other goals in the closing 35 minutes.

Last year's beaten All-Ireland finalists led by 0-11 to 0-2 at the interval, with Cillian firing three of those points, with six different scorers in the opening half.

Two of those points came from defender Donal Vaughan, with all bar two of Mayo's tally from play, as they claimed a nine-point lead at the break.

Both of New York's opening points came inside the opening seven minutes, with Mayo leading by 0-4 to 0-2 at that stage, but it wasn't until six minutes into the second half before New York claimed their third score.

With 11 of the team that lost last years All-Ireland final to Dublin, Mayo failed to trail this game moved 0-3 to 0-0 ahead in the fifth minute.

Kelly's effort cut the gap to two points, but Mayo kicked on with points from Cillian O'Connor, Jason Gibbons, Kevin McLoughlin, Moran, and Lee Keegan on target as they moved 0-11 to 0-2 ahead at half-time.

Both managements rang the changes at half-time, with Conor McCormack replacing Kieran O'Connor in the New York defence, while Richie Feeney replaced Jason Doherty for Mayo.

Mayo were fully alert after the break as within 15 seconds of the restart, debutant Diarmuid O'Connor bagged the opening goal.

In the 41st minute, Armagh native Johnny McGeeney registered New York's opening point of the half, and the hosts first score since the seventh minute.

The introduction of Tom Parsons, Alan Dillon and Conor O'Shea added greatly to the Mayo attack during the second half.

Dillon in his first appearance since last year's All-Ireland final cut through for a 56th minute goal chance after Enda Varley provided the assist.

New York's Kieran O'Connor cut in, to make a well placed block, but this infringement came in the penalty area, with referee Padraig O'Sullivan handing Mayo a chance to take a second goal.

New York responded, as Offaly native Kelly registered his third pointed free, but Mayo bagged 1-1 inside a minute, all from the boot of corner-forward O'Connor.

O'Connor bagging his second goal from a penalty, after substitute Brendan Harrison, on his debut was initially fouled.

Gary O'Driscoll fired New York's eighth point, four and a half minutes from the end, but Mayo bagged an unanswered 1-2 including an injury-time goal from substitute Enda Varley to ensure 22-point win.