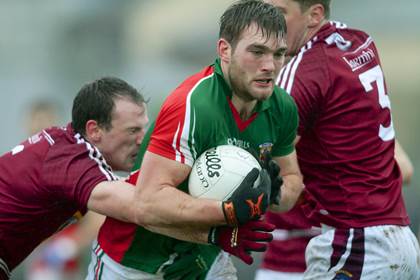 Cillian O'Connor made his first appearance of the season as Mayo won a remarkable game in Mullingar to leave Westmeath on the brink of a quick return to Division 2.

After the winners had raced into a nine-point lead inside the first 10 minutes, Westmeath staged a brilliant comeback to lead by 2-8 to 2-7 at the break. Half-time came just at the right time for Mayo who were able to regroup, and they showed their class by outscoring the hosts by 0-9 to 0-1 after the restart to wrestle back control of the game.

To Westmeath's credit, they never gave up and had the margin back to four points when wing back James Dolan scored his second goal in the dying stages. But the Connacht champions held on to record their second victory in as many weeks to move onto four points.

However, Paul Bealin's men looked doomed after their fourth straight defeat. They are now cut adrift at the bottom of the division following Kerry's first win at Tyrone's expense.

Fielding nine of their All-Ireland final team, Mayo seemed intent on blowing the hosts out of the water in the early stages. Mikey Sweeney set up Lee Keegan for a second-minute goal before Kevin McLoughlin and John Heslin traded frees.

Westmeath were rocked for a second time when Sweeney capitalised on a goalkeeping blunder to raise Mayo's second green flag.

A rout looked to be on the cards when points from Enda Varley and Aidan O'Shea stretched the visitors' lead to 2-4 to 0-1 with barely 10 minutes elapsed. But then came the incredible Westmeath comeback which was sparked by Kieran Martin's fisted goal in the 12th minute.

Late call-up Doron Harte quickly added a point to give the home side an unlikely lead at the break.

When Heslin converted his fifth free after the restart to put the Lake County two in front, 2-9 to 2-7, the upset looked on, but Mayo responded in devastating fashion. They reeled off nine unanswered points, including three from McLoughlin, two from Alan Freeman and one each from Keegan and substitute David Drake, to effectively end the game as a contest.

The large Mayo support was given further reason to cheer when Cillian O'Connor was introduced during this fine period of dominance.

Dolan scrambled home a 68th minute goal to give the maroon and whites renewed hope, but Freeman had the final say for James Horan's side.