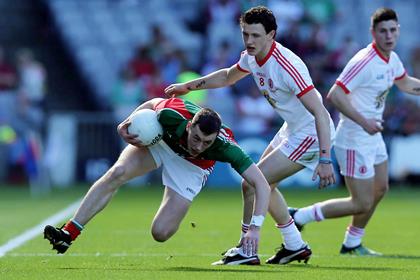 Mayo's Diarmuid O'Connor of Mayo with Ronan Nugent of Tyrone.
©INPHO/Donall Farmer.
The Tom Markham Cup is Mayo's after a 2-13 to 1-13 defeat of Tyrone at sunny Croke Park.

The winners effectively sealed victory with a blistering unanswered scoring spree of 1-4 at the start of the second half.

Goals from Tommy Conroy and Darragh Doherty in either half proved to be the difference between the teams as the westerners - inspired by corner back David Kenny - claimed the national title for the first time since 1985.

Mayo had been outplayed for large parts of the first half but still led by one point at the interval, 1-4 to 0-6. The all-important major - their only first-half score from play - was provided by their goal specialist Conroy in the 30th minute, with free-taker Liam Irwin notching their four first-half points.

Tactically, Tyrone appeared to be on top during that opening half-hour but, despite the influence of Frank Burns, they were very wasteful in front of the posts.

The Red Hands, with their backs to the Hill, mounted the first attack but midfielder Burns' popshot flew to the left of the posts and wide. Burns' midfield foil Ronan Nugent demonstrated greater accuracy as he split the posts for the opening score of the match in the second minute.

When Darragh Doherty won a Mayo free-in in the fourth minute, their top scorer in the championship, Irwin - one of the many Breaffy clubmen on duty at HQ today - found the range with a nice left-footed strike off the deck. At the other end, centre forward Conor McKenna pulled his shot to the right of the uprights.

Trillick clubman Lee Brennan restored the Ulster county's advantage with a converted free from the hands but captain Ruairi McGlone had no such luck as he registered the underdogs' third wide. The Connacht champions drew level again in the ninth minute when Irwin once more slotted the free after another foul on Doherty: 0-2 each.

Nugent was completely unmarked as he thumped over his second point from out the field; Mayo levelled through another simple Irwin free in the 13th minute. Doherty recorded Mayo's first wide at the midway stage of the first half.

David Mulgrew gently stroked over the point that edged Tyrone ahead for the fourth time and Mayo followed up with a wide from Doherty and a goal miss from Conroy, who in hindsight was unfortunate not to have been awarded a penalty. But the advantage was played and the Kiltane lad screwed his close-range shot to the left of the net.

Val Roughneen fluffed a free and then missed a chance from play - Mayo's fourth wide in as many minutes. Tyrone corner forward Brennan dropped a weak shot into the hands of Mayo 'keeper Mark Mulligan but McGlone spooned over their fifth point as a two-point margin materialised for the first time in the 24th minute, 0-5 to 0-3.

An ambitious McGlone shot flew wide after O'Neill County sweeper Burns had forced Doherty into an error; full forward Daire Gallagher supplied the northerners' fifth wide; Irwin drilled over a sumptuous free from the deck to reduce the gap to the minimum with 90 seconds left in a disappointing first half, which was just about to be illuminated by a piece of individual brilliance:

In the 30th minute, the man known affectionately as 'Tommy Goals' gave the Connacht champions the lead for the first time when he planted a rocket into the top right corner of the Tyrone net: 1-4 to 0-5. Red Hands custodian Sean Fox got both hands to the ball but was unable to keep it out. It was a lead that the victors would never relinquish.

In injury time, Tyrone caught Mayo napping when Keegan picked out McKenna with a short free and the latter slotted the ball nonchalantly over the bar to leave one point between them at the interval.

Mayo doubled their advantage when Conor Loftus knocked over a free in the second minute of the second half and Doherty - who had won that free - made it a three-point match when nabbing the point that his industry deserved: 1-6 to 0-6.

Conroy blasted over a third Mayo point in as many minutes and Doherty's second point in the 36th minute left five between them. With those four quickfire points in the early stages of the second half, Mayo had taken control of the match.

Tyrone were out of luck when a dangerous high delivery evaded everybody and bounced to safety off the crossbar; almost immediately, at the other end, on 38 minutes, Doherty put the game to bed when he blasted a low shot to the back of the net: 2-8 to 0-6.

With his team in big trouble, Mickey Donnelly now looked to his bench and introduced Cathal McShane and Philip Donnelly in an effort to revitalise the Tyrone attack. Brennan's brace of frees reduced the gap to six after 42 minutes, 2-8 to 0-8.

Brennan arrowed over an inspirational Tyrone point just shy of the three-quarters stage and Donnelly added another one instantly as the eight-point gap suddenly came down to four! The stage was set now for a grandstand final quarter…

Crossmolina's Loftus fired a magnificent Mayo point to steady their nerves but McShane replied to leave four in it again with twelve minutes left. When the effective McShane was bundled over, Keegan's free closed the gap to three. Padraig Prendergast and Brennan traded wides as we went into the last ten minutes of an engrossing encounter.

Tyrone continued to attack in waves but Gallagher and Nugent both fluffed their lines. Mayo fared better as Conroy pointed after Irwin's free came back off the post: 2-10 to 0-12. Enda Kilvarry's charges had the taste of victory in their nostrils when Loftus nailed a superb 57th-minute point to stretch the gap to five.

McKenna's consolation point was cancelled out by substitute Conor Byrne, and Conroy (1-3) instantly added another. Tyrone refused to give up and McKenna flicked the ball to the Mayo net in the third of three added minutes but the Red Hands ran out of time on a famous day for Mayo football.