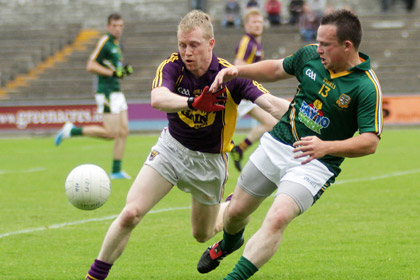 Jamie Carty's goal in the second minute of injury time handed Wexford a thrilling 1-10 to 0-12 victory over Meath at Wexford Park.

Trailing by five points after eleven minutes and again 42 minutes into the second half, David Power's young development squad side never gave up and outscored their guests by 1-4 to 0-1 in the last quarter, with midfielder Carty supplying the coup de grâce right at the death.

The winners will have some shiny silverware in the bag as they lock horns with either Cork or Kerry in an All-Ireland semi-final next month. This was a wonderful, free-flowing match where football was the real winner.

Sean Barry's unlucky charges led by 0-8 to 0-4 at the break, thanks in part to some heroic defending from goalkeeper Johnny O'Connor and corner backs Michael Kearney and Chris O'Connor to deny the Slaneysiders an injury-time goal.

When Ciaran Lynch popped over a close-range free in the eleventh minute it gave the rampant Royals a commanding 0-5 to no score lead. Conor Sinnott supplied the Model County's opening score and wing back Graham Carty added another one from 30 metres as the hosts started to settle.

Niall Harney's superb left-footed free from the right wing reduced the arrears to two but Danny Quinn made it double scores with a timely Meath point on 18 minutes, 0-6 to 0-3. Sinnott exploited a poor Meath clearance to loft over the fourth Wexford point of the night.

The visitors lost influential midfielder Alan Douglas to a mysterious black card but a Ciaran Kelly point nonetheless restored their three-point cushion with five minutes left in the first half. Quinn's third point on the stroke of half time assured Meath of a 0-8 to 0-4 advantage and their defence did well to repel a Sinnott goal-scoring opportunity before the short whistle sounded.

Sinnott popped over a Wexford free to narrow the gap upon the resumption and took his point from play instantly to leave two in it with three minutes played in the second half. Substitute Darragh McNamara initiated and finished the move that culminated in an important score for the away team: 0-9 to 0-6.

Castletown's Kevin Ross popped over a free as the gap went back out to four and a good Kelly point after impressive work from Syddan's Kevin Treanor made it 0-11 to 0-6 - three successive scores for the Royal County who led by five at the three-quarters stage.

Then started the comeback...

Another Sinnott free was followed by a point from midfielder and matchwinner-elect Carty before Declan Murphy missed a great chance to tie the scores up when a second glorious Wexford goalscoring chance of the night went abegging. Just two points separated the sides when Sinnott floated over another free...

Lee Devereux made it a one-point game in the 52nd minute and the home support were frustrated when Graham Carty's attempted leveller drifted wide with time running out. Kelly grabbed a vital Meath score in the 59th minute to double the difference after O'Brien's 50-metre free ran out of steam.

Incredibly, in the second minute of injury time, Carty took advantage of sloppy Meath defending to finish to the net after a speculative effort at a point had dropped short. That was effectively the last touch of the match as the Model County held on for a famous victory.