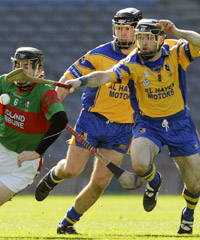 Portumna's Leo Smith (right) closes in on Birr's Rory Hanniffy during the Club Hurling Final
Portumna All-Ireland winner Leo Smith is expected to make his Leinster hurling championship debut for Westmeath against Dublin at O'Moore Park on Sunday. The midfielder, who played a starring role for the Galway champions in their All-Ireland club final defeat of Birr on St. Patrick's Day, qualifies to play for the Lake County through his work as a teacher in Athlone. Smith was persuaded by former Westmeath manager Seamus Qualter to throw in his lot with his adopted county last year, but failed to command a starting place in the county's run to a second Christy Ring Cup win in three years. However, with inspirational team captain Brendan Murtagh ruled out with a fractured figner picked up in a challenge against Laois two weeks ago, Smith is expected to get his chance. Centre forward Murtagh was in top scoring form from both play and placed balls in last month's NHL Division 2 final victory over Carlow, and the free-taking duties are now likely to fall to his Clonkill clubmate Andrew Mitchell, who is poised for a recall. "Fortunately we have Andrew Mitchell, who was the county's regular free-taker for years, on hand to take over that duty and sometimes you can use a loss like this to your advantage so that's what we'll be hoping," said Westmeath manager Johnny Dooley. Another of Clonkill's All-Ireland intermediate club winning contingent, Adam Price, is also in line for his first championship start at half back. Tweet