The Rumble in the Concrete Jungle 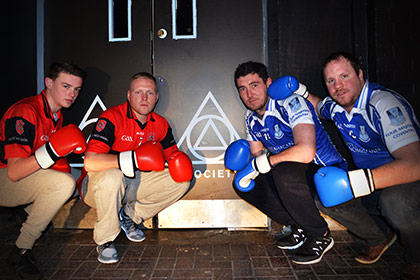 Four Masters and Roger Casements are ready to rumble

Normally they'd slug it out on a pitch, but two Gaelic football clubs from Coventry are to don boxing gloves in a head-to-head which doesn't involve just the fellas but also aspiring female boxers.

In what is believed to be the first match-up of its kind in the UK, players from the rival clubs of Four Masters and Roger Casements are to square up to each other in the ring on Friday, 27th March.

A total of 12 bouts are planned to take place at the venue of the old pink parrot nightclub in Coventry which is now called 'Society'.

Already there's a lot of peripheral betting on which club will emerge victorious, be it Holbrooks based Four Masters or Roger Casements who are based in Binley.

Nine male players from each club will oppose each other in three 2 minute rounds.

In addition, three ladies fights are planned on the fight card.

"We're hoping to raise about £2,000 for each club from what we believe is the first competition of its type between Gaelic football clubs in the UK" said Four Masters spokesman Brendan Harkin.

The event is being sponsored by Coventry based firm JCM Civil Engineering. The entry fee will be £15, and that includes admission to a disco in the night club afterwards.

The clubs are taking it so seriously that players have been undergoing gruelling training sessions to ensure they're fighting fit for the big occasion.

"The idea is to raise much needed money for both clubs" added Roger Casements spokesman Seamus Harnett.

He said there was fierce but friendly rivalry between the two clubs and he hoped that would be the case when the fighters line out for what promises to be nothing short of explosive with members from both clubs fighting to land the winning blow.

As well as from the respected clubs, tickets can be brought from the following Bars/Clubs in Coventry, Christ the King Club, Flannellys, The Hearsall Inn and the Sphinx Club.

Action gets under way at Society Nightclub in Tower Street, Coventry at 8pm.