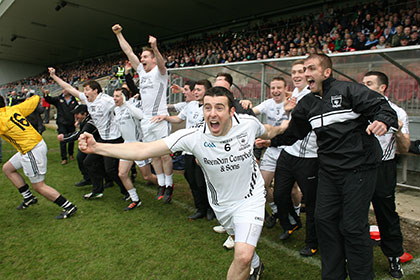 The three green flags proved to be the difference between the sides as Clonoe saw off the gutsy challenge of Martin Penrose, Conor Gormley and their Carrickmore team-mates.

The Damien Cassidy managed outfit hit the ground running and raced into a 0-3 to 0-1 lead after 10 minutes with county star Conor McAliskey on target with two points.

McAliskey then set up Coney for the O'Rahilly's opening goal two minutes later but Carrickmore refused to panic and the sides went in level at the break, 1-3 to 0-6.

The second half was only 10 seconds old when McNulty pounced for Clonoe's second goal but their opponents, once again, responded in a positive fashion and took over in pole position when Mickey McCallan sent over a point.

Lavery's goal proved to be one set-back too many for Carrickmore, however, and two late pointed frees from Stephen McNulty put the issue beyond any doubt.

The O'Neill Cup winners will have to curtail the celebrations somewhat as they are due to take on Derry champions Ballinderry in the Ulster Club SFC on Sunday.