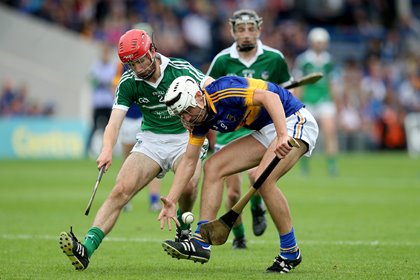 There was a controversial ending to the Munster MHC final but that is of little concern to Tipperary who bridged a three year gap to their last success in the grade.

A Lyndon Fairbrother inspired Premier County denied Limerick a third title in-a-row when finishing with three points to spare but referee Joe Larkin's timekeeping was called into question by the Shannonsiders.

The man in the middle played just one minute of the two that were signalled for injury-time as the Leo O'Connor managed outfit went in search of a goal that would have rescued a draw.

The controversy failed to dampen the celebrations of Liam Cahill and his players who overturned a two point half-time deficit to get their hands on the silverware.

Tipp were quick out of the blocks in the entertaining tussle and had three points on the scoreboard before Limerick opened their account in the 5th minute.

The home side struggled to cope with right corner-forward Peter Casey throughout the opening 30 minutes and he found the target with eight points as Limerick overcame their slow start to lead by 0-10 to 0-8 at the halfway stage.

Fairbrother finished with seven points to his credit while Tommy Nolan raised three white flags for the winners. The result was hard luck on Na Piarsaigh clubman Casey who accumulated 0-14 (10 from placed balls) during the 60 minutes.