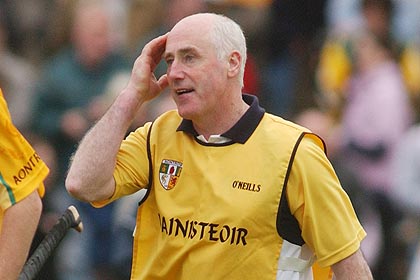 Dinny Cahill
Antrim's search for a new senior hurling manager has finally ended with the appointment of Dinny Cahill to the position. This will be the Tipperary native's 'second coming' with the Saffrons, having previously managed them from 2002 to '05. And after his reign ended in controversial circumstances when just 12 players turned up for a training session in July 2005, Cahill claims he has "unfinished business" to attend to. "I believe that I now have a chance to address what feels like unfinished business," he said on the Antrim GAA website. "When I first went up to Antrim I had just finished coaching Tipperary minors and we were lucky enough to achieve All Ireland success at that time. I was relatively inexperienced then as far as senior inter-county management was concerned. "Through my previous involvement with Antrim and more recently with Portumna and Graigue-Ballycallan, I have gained extensive experience to assist me in this new challenge. With the right commitment from players, clubs and supporters in Antrim we can build a more consistent and successful future for the county. "This has to be a co-ordinated effort where we improve standards, not just a senior county level but right throughout the clubs from adult down to juvenile. I am looking forward meeting with players, supporters and club and county officials". As well as managing Portumna and Graigue-Ballycallan in recent years, Cahill also managed Laois in 2006. Cork native Bob Thornhill has been confirmed as one of his selectors, while former Antrim star Gregory O'Kane is also expected to join the new management set-up once Dunloy's interests in the All-Ireland club series have ended. Tweet