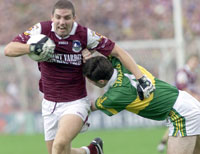 Kevin Walsh breaks a Kerry tackle
Kevin Walsh has been confirmed as Sligo's new senior football manager, after being ratified at a meeting of the County Board last night. A double All-Ireland SFC winner with Galway, Walsh succeeds Tommy Jordan in the position and brings with him a star-studded backroom team of Sligo football in Paul Taylor, Paul Durcan and Dessie Sloyan. After ending a 32-year wait to capture their first Connacht SFC crown last year, Sligo suffered relegation to Division Four and made a quick exit from the province this past year. Now with their three-time All Star winner installed the Yeats County will be hoping to gain immediate promotion and be ready to face either London or Galway in the semi-final of next year's Connacht SFC. Tweet