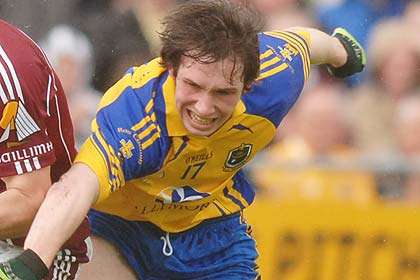 Roscommon's David Keenan
Roscommon boss Fergal O'Donnell must plan without David Keenan for Saturday's Connacht SFC semi-final against Mayo, while an ankle injury is threatening Senan Kilbride's participation. Former All-Ireland minor winner Keenan dislocated his shoulder in the quarter-final win over Leitrim, and is expected be out for most of the season. Meanwhile, St. Brigid's front-man Kilbride is struggling with an ankle injury and a decision on his fitness is unlikely to be made until the morning of the game. Wing forward Cathal Cregg is set to miss out again despite have resumed light training after injury, while long-serving midfielder Seamus O'Neill has been ruled out for the rest of the year with a ruptured Achilles tendon. Tweet