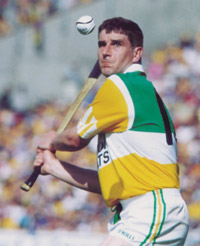 Michael Duignan playing hurling
Michael Duignan, who recently announced his retirement from inter-county hurling, has shocked Offaly GAA supporters for a second time by transferring to the Raheen club in Kildare. The news is a major blow to his former club St. Rynagh's who have high hopes of winning both the Offaly Senior Hurling and Intermediate Football Championships this year. Even though Duignan has been living in Naas for some time, his transfer has still taken the Offaly GAA fraternity by surprise. Duignan has played both senior football and hurling for the Faithfuls, but it was as a hurler that he really made his name. He won All-Ireland hurling medals in 1994 and 1998 and was named as an All-Star in the latter year. Tweet