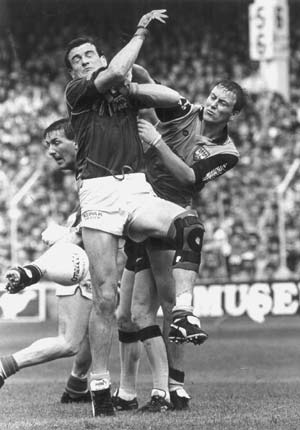 Colm O'Rourke
Colm O'Rourke Happy 51st Leinster Final, 1976. The Dubs are at the apex of their considerable power. Meath have them on the rack and are awarded a penalty into the Canal goals. Paddy Cullen gives a good impression of a panther stalking his line. The Meath forwards look at each other. Who wants the responsibility? The atmosphere is packed with tension as a lanky eighteen year old from Skryne steps forward. It is only his third Championship game but he has the confidence and the willingness to assume the responsibility. He drives the ball to Cullen's right. Further right than he intended. It whistles by the umpire and the blue and navy flags fly on Hill 16. The Dubs go on to win by two points and to capture successive All-Irelands. They also earn the title,"great". If only... Born in Aughavas in Co.Leitrim on the last day in August, 1957, Colm O'Rourke has since become one of the country's most successful footballers. While still a young boy, his family moved to the plains of Royal Meath, to the parish of Skryne with its' rich pastureland and even richer football tradition. Many Leitrim natives, who leave their home county, manage to "make it" in the professional and business world. Perhaps it is the survival syndrome. Very few make it to the top of the football tree. Colm O'Rourke has 'made it' in both worlds. He teaches in St. Patricks Classical School in Navan and runs a thriving Sports Shop in the Navan Shopping Centre. He writes a column for the Sunday Tribune throughout the season and, this year, he became the Sunday Game's resident pundit. Meath's prolonged march to the All-Ireland Final has meant that R.T.E. have been unable to use his expert analysis as often as they intended. Did they expect Dublin to beat Meath in the first round? O'Rourke is well suited by the expert's chair. His comments are always accurate and relevant, never patronising or banal. It could be that he has a future in that chair. From it and from his column in the Sunday Tribune, he is able to indulge two of his three greats passions, discussing Gaelic Football and jousting with the G.A.A. authorities. Blessed with a sharp eye for playing patterns, he can spot team strengths and weaknesses long before the majority of observers. He knows more than most about the players, or more importantly, what is relevant about them. The chances are that he has encountered most of them at close quarters sometimes at very close quarters. It is an advantage that R.T.E. producers and Tribune editors recognise. Not so the G.A.A. authorities. In October 1988, after fourteen-man Meath had beaten Cork in the replayed All-lreland Final, O'Rourke incurred the wrath of the administrators by frankly admitting, in the Sunday Tribune, that he and his colleagues had regularly fouled their opponents in order to reduce the advantage of the "extra" man. That Meath, and O'Rourke, were not the first, (and won't be the last), to use the tactic was conveniently forgotten. His "crime" was to admit it publicly. Perhaps his column should be titled, "From The Players Point Of View"', although it is difficult to visualise his stance changing dramatically when he eventually becomes an ex-player. Anyway, his Sunday column is a must for football enthusiasts. The Final of humble Dunsany's Tournament in 1976. Skryne V Walterstown on a miserable November day, in muddy conditions. A fifty/fifty ball is contested by young O'Rourke and the Walterstown goalkeeper, Sean Reilly. Following an accidental clash, the Skryneman writhes on the cold, wet surface. Eventually he is removed to hospital in Navan where the worst fears are confirmed. Severe damage to his knee ligaments, medial and cruciate is diagnosed. An operation and a lengthy spell in hospital follows. The injury is bad enough to raise doubts about his ability to play football again, at any level. He had played three championship games for Meath. Last May, Meath and Galway met in a challenge game at Walterstown to raise funds for St. Patricks Classical School, Navan. Kevin Mallon, a teaching colleague of O'Rourke produced an excellent programme for the occasion. On page 19, he listed a very small and elite group of Meath footballers, those who had played more than forty Championship games for the county. The list was headed by the legendary Peter McDermott with 51 Championship appearances. Then there was Paddy O'Brien and Joe Cassells. In seventh place with forty one appearances was Colm O'Rourke. With Meath due to face Dublin in the first round of the Leinster Championship Peter McDermott's record seemed secure, unless, of course, O'Rourke intended to play on until the middle of the decade. Three months and nine games later, the Skryneman is poised to join the "Man in the Cap" at the head of the leader board. It has been an incredible fifteen years, lowlighted by the knee injury, the Championship failure to Wexford and Longford in 1981 and '82 and the losing of last year's All-Ireland final. The absence of a Championship medal with Skryne also hurts. But the highlights easily compensate for the disappointments. There may be one or two players in the country who have had a longer Championship innings than the Skryneman. It is doubtful if they have two All-lreland medals, two National League medals and two All-Stars. It is doubtful if they have played 51 Championship games for their county. It is doubtful if they have recovered from such soul-destroying adversity. And it is doubtful if they are as good at playing football as Colm O'Rourke is. We may be seventeen years early, but he will know what we mean when we wish him a Happy 51st. Taken from Hogan Stand 13th September 1991 Tweet