Club Hurling Team of the Week 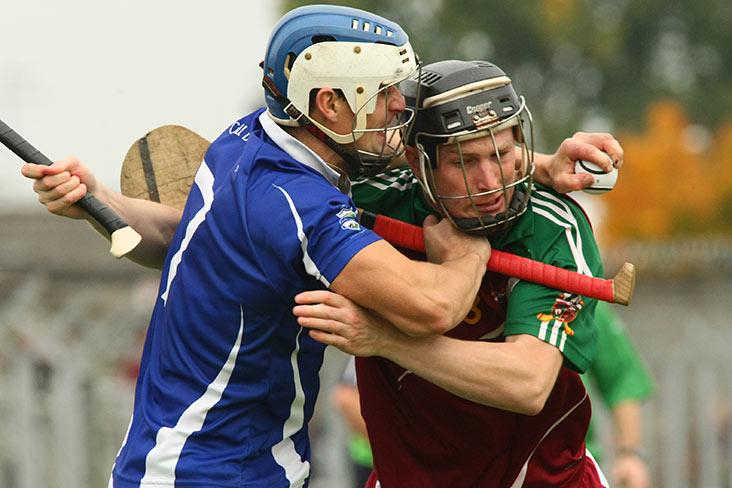 A word in your ear. Mairtin Doran Kildalkey with Kiltale's Peter Durnin will cross paths again in the semi final.

After last weekends action we are down to the last four in both the Senior and Intermediate hurling championships. Kildalkey play Kiltale and Trim face Killyon in the senior while Gaeil Colmcille have set up a local derby with Kilskyre/Moylagh and Na Fianna take on Ratoath. We pick our best XV from the quarter final action.

1 Eoin Reilly Na Fianna: Turned in a brilliant display that included some outstanding saves to keep Wolfe Tones out in the Intermediate quarter final at Lomans Park.

2 David Conneely Kildalkey: Strong showing by the corner-back that contributed to his side's intact defence.

3 Mickey Foley Gaeil Colmcille: Another strong showing from the Gaeils full back. Was one of the main reasons Drumree failed to raise a much needed green flag in the IHC quarter final at Trim.

4 Neil Cole Trim: Good showing by the tenacious corner-back as Trim put an indifferent Group stages behind them to qualify for the semi final

5 Aaron Ennis Clann na nGael: Fulfilled his primary role as a defender before contributing crucial scores as his side retained senior status.

6 James Toher Trim: Playmaker and consumate free-taker. He displayed once again why he is the top player in the senior ranks.

7 Mairtin Doran Kildalkey: The experienced wing-back put in a gutsy hour, helping his team to a big win over Dunboyne at Pairc Tailteann.

8 Stephen Morris Blackhall Gaels: Scored a couple of fine points and put in a strong shift to try and lead his side into the last four.

9 Sean McGee Trim: A couple of fine points from play complimented good workrate from the midfielder in that win at Pairc Tailteann.

10 Paddy Conneely Kildalkey: Four points from play as well as linking up well with his team mates as Kildalkey set up a semi final date with holders Kiltale.

11 Sean Quigley Dunboyne: His side's main free-taker who worked hard to keep Dunboyne in contention until they were sunk by the goals.

12 Fionn Ferguson Gaeil Colmcille: His free taking and work rate proved crucial as Gaeil Colmcille saw off Drumree 1-15 to 0-12 to advance to the IHC semi final.

14 Barry Slevin Na Fianna: Na Fianna will be thankful that the ace marksman is back from injury. Hit a very impressive 1-10 out of his teams 2-11 in their quarter final win over Wolfe Tones.

15 Michael Cullen Trim: The county minor star contributed 1-2 from play and linked well with his fellow forwards at headquarters.