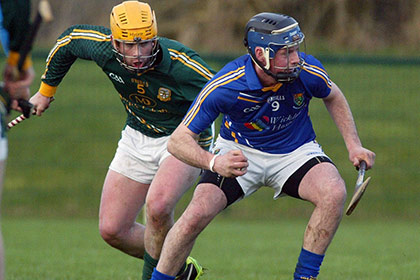 After comfortable beating Wicklow in the Kehoe Cup Meath were comprehensivly defeated by the Garden County in the opening round of the NHL at Arklow.

This game produced a very lively start with Wayne O'Gorman pointing within 15 sec and and Peter Durnin replying before the first minute had elapsed. However this was the only time that Meath held parity as Wicklow dominated the rest of the game and despite five missed frees they led by 6 pts at the short whistle. Andy O'Brien was the main threat from play with 3 pts. Wayne O'Gorman scored Wicklow's goal after 20 mins.

Michael Lee scored 3 frees early in 2nd half to push Wicklow further ahead and were able to see out the game as in the last 10 minutes Meath dropped several frees into the Wicklow goalmouth to no avail so in the end a comfortable opener for the Garden County.