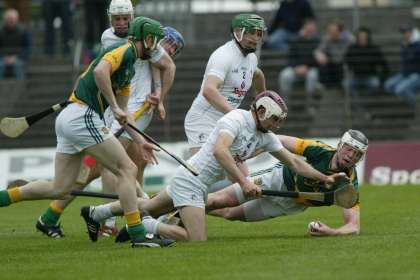 After losing twice to Kildare in league tussles earlier this year, Meath's senior hurlers turned the tables to advance to the semi-finals of the Christy Ring Cup in a well-contested encounter at Pairc Tailteann on Saturday.

The all-important goal which separated the sides at the end arrived after 26 minutes when James Kelly fired to the net at the hospital end following a pass from Paddy Conneely.

That score left Meath leading by 1-6 to 0-7 and Kildare were unable to regain the advantage after that. The sides had been on level terms five times before the green flag finish with Stephen Clynch and Paul Divilly prominent in point-taking.

Clynch hit seven points overall with two of his scores in the opening five minutes coming from play, the second of them being a terrific long-range effort. Near the end of the opening quarter hour Peter Durnin delighted the home supporters with a delightful score from under the stand.

Kildare appeared to be taking control when hitting three successive points, from Conor Kenny, Johnny Enright and David Harney, to leave them 0-7 to 0-5 to the good. But they didn't register again in the first half.

Noel Kirby's first of four converted frees was followed by Kelly's goal and then the young Kiltale clubman  added two points to leave the board reading 1-8 to 0-7 at the break.

Two more converted frees by Clynch soon after the restart steadied the home side with the second of them leaving the margin five points. Kildare  did get the margin down to two but Meath displayed admirable resilience to keep their noses in front.

The Lilywhites came close to finding the net five minutes into the second period when a shot from Divilly was cleared off the goal line by Willie Mahady. Seconds later Durnin fluffed a great chance of raising the green flag when finishing wide after being placed by Kirby.

Meath were ahead by 1-12 to 0-12 at the three-quarter stage and although Mark Moloney was impressing at centrefield, Kildare were unable to turn things around. Nicky Horan, who did not start because of an injury, joined the action in the final quarter and his experience helped Meath.

After Kirby slotted over his fourth free to leave the scores 1-15 to 0-14 it was announced that there would be four minutes of added time.  Clynch increased the lead to five points before Kildare finished with scores from Kenny and Moloney.

But it was too little too late and Meath held out for a surprise but well deserved victory.