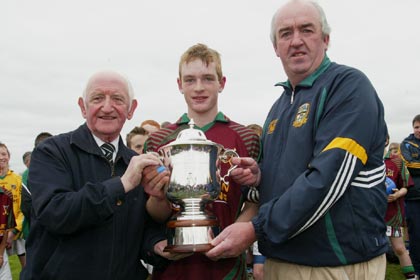 Kiltale added another U14 title to the title they won last year by overcoming Ratoath in Kilmessan on Saturday.

Kiltale were quick off the mark with a goal from a 65 by captain David Schilder and further goals from Ronan and Ross Ryan gave Kiltale a cushion which they never lost.

Kiltale had points from Hugh O'Sullivan, Michael Burke, Robert McGuinness and David Schilder to put them ahead by 3-7 to 0-1 at half time.

Darragh Kelly got a point for Ratoath in the first half and was unlucky not to get a goal only for great defending by Brian Harnan and Daragh Walsh.

Kiltale started off brightly in the second half with two goals from Ronan Ryan and one from his brother Ross.

Kiltale got further points from David Schilder, Hugh O'Sullivan, Iarla Hughes and David McLoughlin and Ratoath replied with a point from Daragh Kelly.

Daragh Kelly scored two goals in last five minutes but it was to late for a Ratoath comeback.

Brian Harnan was outstanding throughout the game and got great support in defence from Hugh Smith, Sean Kiernan and Daragh Walsh.