County Board want to stick with O'Mahony 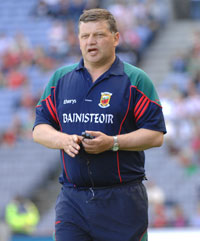 Mayo manager John O'Mahony
The Mayo County Board have confirmed their desire to keep John O'Mahony at the helm as the county's senior manager. Following his side's narrow defeat by Tyrone in the third round of the All-Ireland qualifiers, O'Mahony stated that he would have to "sit down with the county board and see what they want". Now Mayo GAA secretary Sean Feeney has said that officials within the county want the Mayo native to stay on as boss, and the position is still his if he wants it. "John was appointed for three years with a review and we are happy to see that through," said Feeney. "That was the agreement and there's no move against John. He's there and if he wants the job it's his." After the Tyrone game, O'Mahony also added: "I am willing to live by my commitment." Tweet