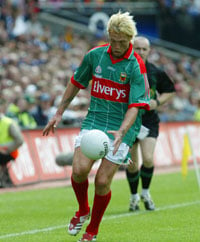 Mayo's Ciaran McDonald
Mayo fans aren't holding out much hope of Ciaran McDonald playing for the county this year. Despite returning to club action with Crossmolina a few weeks ago, the brilliant playmaker isn't expected to be included in manager John O'Mahony's championship panel when it is announced on Friday night. McDonald, who has been blighted by injury in recent years, hasn't pulled on a Mayo jersey since the county's All-Ireland qualifier loss to Derry last July and it could yet turn out to be his final appearance for the county. "We will be letting the players know first," said Mayo selector Tommy Lyons regarding the announcement of the championship squad. "Many players have been out with long-term injuries and we have to consider everything." McDonald's club-mate James Nallen didn't feature in the National League campaign either, but is expected to make the squad after playing in a recent trial match. "A number of players were taking breaks and the likes of David Brady and Kevin O'Neill have retired. James was involved with us recently," Lyons added. Tweet