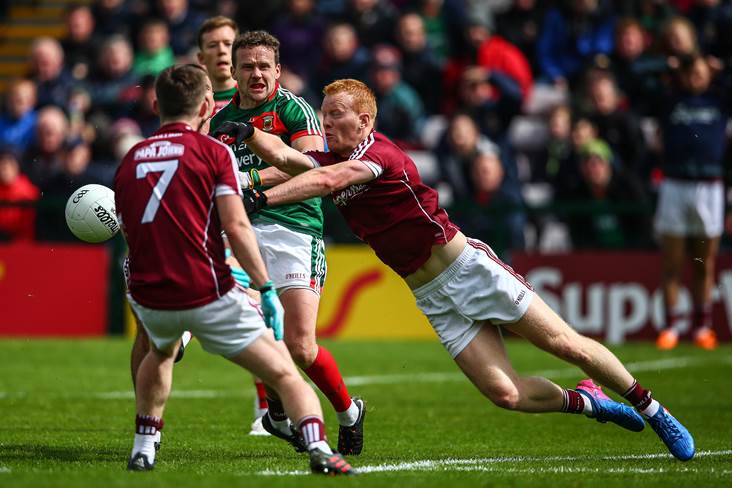 The drama was palpable at Pearse Stadium as Galway edged out 14-man Mayo by 0-15 to 1-11 in a thrilling encounter.

Both teams made a mockery of the shocking conditions to deliver a terrific game of football, which the holders won by the narrowest of margins to seal a place in the provincial final against either Roscommon or Leitrim next month.

Ultimately, it was a first-half moment of madness from Keith Higgins that cost the visitors, as the Ballyhaunis man needlessly got himself sent off nine minutes from the break and left his team-mates with a mountain to climb. They nearly scaled the summit but three late wides deep into injury time saw them miss out on a replay.

Seanie Armstrong marked his return to championship duty with six crucial Galway scores from placed balls, strikes which were worth their weight in gold when the final tallies were totted up.

A brace of Gary Sice frees had the winners four ahead with 59 minutes played but Kevin Walsh's charges wouldn't score again and they faced into a fierce Mayo onslaught from there to the 78th minute. Cillian O'Connor's fourth, fifth and sixth points reduced the gap to one and the 14 men had the howling wind at their backs. But Galway held on to beat their neighbours for the second successive year and send them crashing from the wild, windy and wet west coast into the Qualifiers.

Having played with the aid of a powerful wind, Galway led by 0-9 to 1-5 at half time and also had numerical superiority as veteran Mayo defender Higgins had been sent off before the break.

Damien Comer, Gareth Bradshaw and Armstrong (free) landed three points in as many minutes as the victors made a purposeful start but the visitors stole ahead in the sixth minute when Kevin McLoughlin planted the ball in the net after a Lee Keegan attempted point came back into play off an upright. McLoughlin had opened Mayo's account seconds earlier.

Michael Daly pointed with aplomb to tie the scores up for the first time and the holders had a lucky escape when Cillian O'Connor's deft left-footed effort dipped onto the crossbar and rebounded to safety. A fantastic Shane Walsh point restored the Tribesmen's lead in the twelfth minute but a disastrous kick-out landed the Galway defence in hot water and O'Connor tapped over the resultant free.

Johnny Heaney dispatched a terrific Galway point from distance at the midway stage in the first half. O'Connor (free) equalised but a '45' and a free from Armstrong saw the Tribe move two ahead. The tension rose as Higgins was dismissed with a straight red card for kneeing Comer between the legs but the visitors nevertheless halved their arrears through an O'Connor free.

An Armstrong free on the stroke of half time doubled the Galway advantage once more. The 14 men got their just reward for some determined play when Fergal Boland clipped over their fifth point deep into first-half injury time. Galway had every right to feel aggrieved to have had midfielder Tom Flynn black-carded during the first half as the Athenry man was wrongly punished after O'Connor deliberately ran straight into him.

The Galway lead was out to three points by the 58th minute - 0-14 to 1-8 - as substitute Sice swung over a free. Another free from Sice 60 seconds later stretched their advantage to four.

Armstrong (free) and Eamonn Brannigan had slotted the first two points after the restart before Armstrong (free - his sixth) and Comer replied to a Diarmuid O'Connor point - 0-13 to 1-6 after 44 minutes. Andy Moran and Patrick Durcan landed inspirational scores for the 14 men following the introduction of Aidan O'Shea but those two Sice frees - after the winners had gone 15 minutes without a score - steadied Kevin Walsh's men as they headed for the winning line.

O'Connor pulled back a free on the hour to reduce the gap to three and the visitors should have had a goal in the 65th minute when Ruairi Lavelle's short kick-out again put his defence in all sorts of danger but Heaney got back on his line to save the day, denying Danny Kirby an equaliser.

As the temperature soared, a brace of inspirational O'Connor points from distance - one from play and the second from a free - had the gap back to a point with two minutes of normal time remaining.

Mayo pushed hard for an equaliser amid mayhemic scenes as almost eight minuets were added on, but their hopes went up in smoke as O'Connor - playing like a man possessed - and Evan O'Regan (twice) missed late chances to tie the scores up.