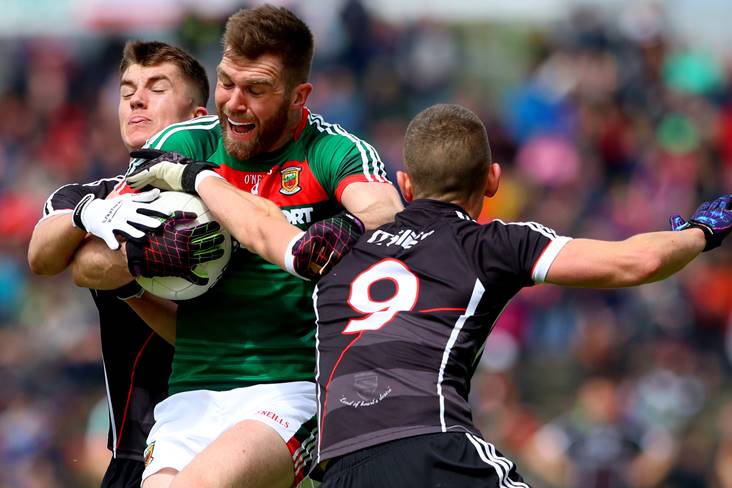 Cillian O'Connor scored 1-6 as Mayo finished strongly to down Sligo in this afternoon's Connacht senior football championship quarter-final in Castlebar.

Stephen Rochford's side were put to the test by the Yeats men for large portions of this contest and their goals arrived at ideal times, with Diarmuid O'Connor hitting the net for them just before half-time to take in a four-point lead.

Niall Murphy's point in the 61st minute for Sligo left a goal between the teams but it was the home side that dominated in the closing stages, outscoring their opponents by 1-4 to nothing, with Cillian O'Connor's major coming for them right on the 70-minute mark.

The Westerners now move into a mouth-watering provincial semi-final date with defending champions Galway in Salthill on June 18th.

The visitors' start was decent one, with Stephen Coen latching on to an over weighed pass inside and splitting the uprights just 20 seconds in.

Cillian O'Connor's first free of the afternoon drew matters level before Andy Moran's initial contribution came in the form of an accurately sliced effort off the outside of his boot, nudging Mayo in front for the first time.

Coen's second point was followed by a miscued kick-out from David Clarke in the home side's goal and it allowed Adrian Marren to take back the lead for the 8/1 underdogs after what was an action-packed opening six minutes.

Having misjudged a 20-metre free against the breeze, Kevin McLoughlin made a mends by stroking over off his weaker right boot and the sides would be square for the fourth time on the quarter hour mark after Mark Breheny (free) and the excellent Patrick Durcan traded scores.

Some splendid work from Cillian O'Connor inside saw Rochford's side back in the ascendancy, with their skipper nabbing possession in front of his marker and dishing to an onrushing Seamus O'Shea, who was impeded by Keelan Cawley on route to goal. Cawley was cautioned and placed ball specialist O'Connor stroked over the resultant free to make it 0-5 to 0-4 with just over 10 minutes remaining in the half.

A Marren free was met by O'Connor's third in the 31st minute to keep the margin at one, with Mayo having lost McLoughlin to injury while Kyle Cawley was called ashore for Sligo which saw early introductions for Jason Doherty and David Kelly, respectively.

Unmarked in the square, Tom Parsons had the game's first clear-cut goal chance for Mayo which the Charlestown man shot wide after a late challenge, but it seemed the Yeats men were destined for disaster before the break as Diarmuid O'Connor's strike came at the perfect time for his team.

Last year's Young Footballer of the Year would be made earn his first score of this year's championship too, having been threaded through the centre by O'Shea to bounce off two challenges and control his drop-kicked finish low beyond Aidan Devaney in the Sligo goal.

Devaney's opposite number Clarke ensured that the margin stood out four at the interval, rising high to nab a Breheny free which looked to be dropping over the crossbar until his intervention.

Devaney measured a 40-metre free perfectly to leave a score between the teams two minutes into the restart, but Mayo should have had their second goal when Durcan cut through the visitors' centre and toe-poked wide.

Debutant Fergal Boland got his first score in All-Ireland SFC moments later and Sligo looked like to be falling apart at the back when veteran Moran was fed inside and popped over with plenty of time and space.

Aidan O'Shea's 43rd minute introduction came as a blood substitute for Diramuid O'Connor and the big Breaffy man would make his stay permanent in Moran's place some 10 minutes later.

Points from Paddy O'Connor and Breheny (free) kept the heat on the hosts heading into the final 20 minutes, with Boland and captain O'Connor (free) seeing their efforts erased by another accurate free from Breheny and sub Murphy at the other end.

A head injury to Seamus O'Shea saw Danny Kirby enter the fray and the Castlebar Mitchels ace would make an impression in the little time remaining, landing his side's 13th point after Cillian O'Connor had come up with a quick 1-1 to kill off Niall Carew's men.

Sub Conor Loftus provided the fisted cross for the Ballintubber man's first major of the championship and Kirby and Jason Doherty kept the scores coming in injury-time to ensure the difference was bumped up to nine-points come the last whistle.