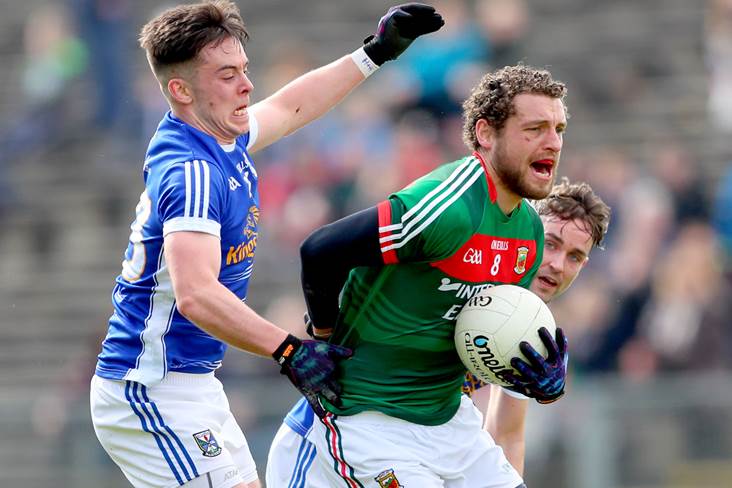 Gearoid McKiernan was Man of the Match as Cavan recorded a stunning 1-14 to 0-15 victory over Mayo at Castlebar.

The Breffni County's first win of the campaign provides a major boost to their survival hopes while it also propels the losers into the relegation quagmire. With two rounds of games left to play, Cavan now have three points while Mayo remain rooted on four.

With 8,565 in attendance, McKiernan's fantastic goal at the end of a flowing team move ensured that the underdogs were within the minimum at the short whistle, 0-9 to 1-5. In a first half decorated by some exceptional point-taking, the home team threatened to pull away at times but Mattie McGleenan's men hung in there gamely and delivered a real sting in the tail when McKiernan netted on 37 minutes.

After a tentative and disjointed start, midfielder Tom Parsons and veteran full forward Andy Moran lofted over a couple of Mayo points in the seventh minute; Cavan got up and running on ten minutes when their talisman McKiernan nonchalantly dispatched a free that had been moved in to a more central position.

Fergal Boland's beauty and an equally-impressive strike from midfielder Danny Kirby left Stephen Rochford's men three points to the good with 15 minutes played. The outstanding Dara McVeety clipped over an excellent Cavan point from a difficult angle after Moran had swiftly cancelled out a second McKiernan free with a delightful left-footed finish. A Kevin McLoughlin free had the winners ahead by double scores with ten minutes left before the break, 0-6 to 0-3.

Conor O'Shea- from distance - and Kirby - off the outside of the boot - added terrific Mayo scores, with McVeety on target in between, as it remained double scores after half an hour. O'Shea and McKiernan quickly traded outstanding points at either end with the short whistle imminent. Mayo looked all set for a four-point half-time lead but McKiernan had other ideas, thumping his shot down the middle of the net from close range with the last kick of the opening period after the home defence was outsmarted.

Kirby doubled the difference upon the restart but the Breffni County had the bit between their teeth when they re-emerged and they soared ahead for the first time with quickfire points from full back Rory Dunne, Conor Madden and McKiernan - 1-8 to 0-10 after 42 minutes. Tomas Corr took his point after a superb one-handed catch to increase the visitors' lead and the busy Martin Reilly cancelled out Moran's next score with a wonderful Cavan point on the break.

Kirby's fourth from play was an inspirational strike for the 2016 All-Ireland finalists and Footballer of the Year Lee Keegan drilled over the point that left the sides deadlocked at the three-quarters stage. Centre back Keegan hammered over the lead point from the middle of the park but Corr replied in kind on 55 minutes.

Substitute Shane Nally had Mayo back in front in the 58th minute but McKiernan drew the visitors level again with a monster free off that wand-like left peg after Keegan bowled over the flying McVeety.

With the match in the melting pot, Mayo were guilty of a couple of poor wides and they were punished four minutes from the end when McVeety punctuated a patient build-up to spin and stroke over the lead point off his left. Substitute Joe Dillon increased the Cavan lead after Cillian O'Connor had spurned two frees.

The visitors looked far fitter and were full of confidence in the closing stages while the home side appeared tired and clueless.