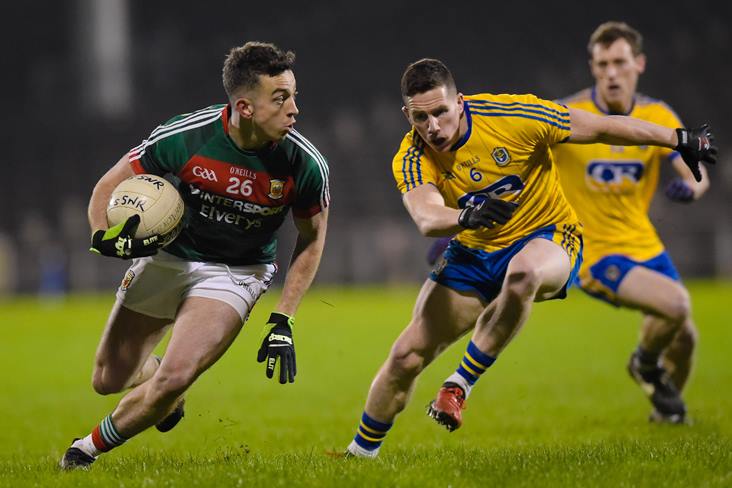 Mayo will be top of Division One overnight after easing past Roscommon in this all-Connacht clash at MacHale Park, 1-19 to 0-14.

With 11,657 in attendance, it was mostly men against boys and the gulf between the sides was much wider than the final scoreline suggests. The winners eased up more than once and, but for that, could have prevailed by a cricket score.

Victory sees Stephen Rochford's charges climb temporarily to the summit of Division One, a point ahead of Dublin, Tyrone and Monaghan, all of whom are in action tomorrow. Roscommon, meanwhile, are rooted to the foot of the table after suffering a third successive defeat. Seventeen of Mayo's scores came from play and they had twelve different scorers, with Cillian O'Connor effectively confirming victory when his penalty goal made it a nine-pont affair four minutes after the restart.

A run of eight unanswered points during a dominant 15-minute spell between the ninth and 24th minutes had the winners ahead by 0-11 to 0-5 at the break, with goalkeeper David Clarke making late saves from Enda Smith and Sean Mullooly to keep the interval gap at six.

Midfielder Shane Killoran - who would be black-carded before the break - opened the scoring for the Rossies and further efforts from Donie Smith and Fintan Cregg made it 0-3 to 0-1. But Mayo, whose opener was supplied by Andy Moran, hit a real purple patch and points flew between the posts from Cillian O'Connor (4), Fergal Boland (2), Jason Gibbons and Diarmuid O'Connor as they assumed a six-point advantage.

Smith and Ciaran Murtagh hit back for Roscommon but Mayo - who introduced Footballer of the Year Lee Keegan as a replacement for the black-carded Colm Boyle - closed the first half strongest with further points from Donal Vaughan and Conor O'Shea. When the visitors did get in behind their defence, Man of the Match Clarke proved to be more than a match for them…

Mayo, for whom Keith Higgins was immense, got the ideal start to the second half when O'Connor nonchalantly despatched a 39th-minute penalty after Evan Regan was dragged down. Kevin McLoughlin and Regan (free) pointed either side of a Conor Devaney reply as the home side led by ten points after 44 minutes, 1-13 to 0-6.

Devaney pulled back two more either side of one from Tom Corcoran before Keegan thumped over Mayo's 14th point. Brendan Harrison also came off the bench and fisted over the score that made it 1-15 to 0-9. Conor Loftus cancelled out Smith's strike as the gap remained at nine going into the last ten minutes.

Harrison made it double scores and late efforts at either end from Enda Smith (2), Loftus, Keegan and Niall Kilroy were realistically of little or no consequence with the game long since done and dusted as any sort of meaningful contest.