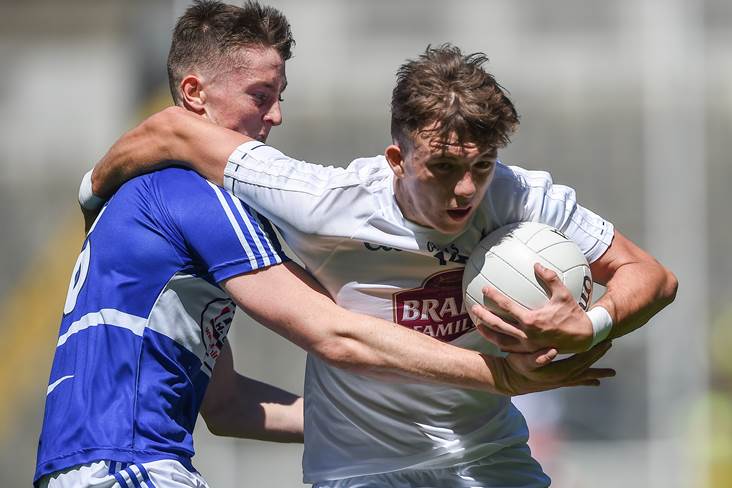 Kildare produced the second-half goods to oust Mayo this afternoon in Tullamore and make their way into the semi-finals of the All-Ireland minor football championship.

Brendan Hackett's side outscored their opponents by 1-10 to 0-6 during an impressive second period showing, with Brian McLoughlin's goal in the 55th minute finally putting the game to bed and advancing them towards a showdown with Kerry at Croke Park four Sundays from now.

The Leinster champions had enjoyed the perfect start to this quarter-final thanks to a superb goal from Jack Robinson (1-5) in the third minute which rocked Mayo early on.

Justin Healy eventually got the Westerners up and running with a point in the sixth minute and two minutes later they'd be rattling the Kildare net through corner-forward Ryan O'Donoghue, who fired home a fine finish.

Points from Robinson and Ciaran Kelly moved Kildare back in front as they reaped some profit during the second quarter, but all their good work was wiped out in an instant once Paul Lambert drove home the Connacht outfit's second major three minutes from the interval.

Colm Moran's point ensured that Enda Gilvarry's charges would take in the 2-2 to 1-4 lead at half-time, with Kildare losing corner-forward Jimmy Hyland to a black card in the added minutes.

Moran and sub Stephen McGreal - a replacement for the black carded Joe Mason - bumped the lead up to three prior to Kildare going on a spree which saw them sail over five unanswered points before Moran eventually stemmed the tide.

Kelly and Robinson added to their own personal tallies by keeping the umpire's arm busy at their end and with five minutes to go McLoughlin settled the issue after getting on the end of a toe-poked pass from Kevin Foley and sending his low effort to the Mayo net.

A fine point from Robinson late on ensured the victory for the Lilywhites, who now face the All-Ireland champions on August 28th for a place in next month's decider.