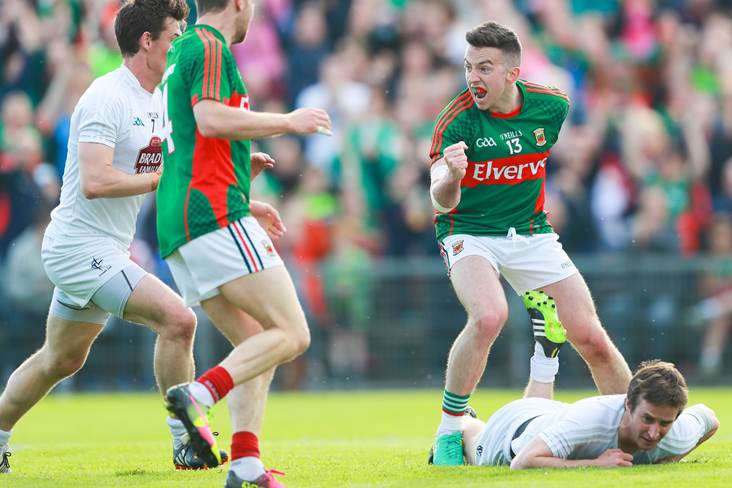 Having missed out on a sixth successive Connacht SFC title, the winners, who had the luxury of playing the second half in first gear, as this match petered to an inevitable conclusion, now find themselves just one win away from an All-Ireland quarter-final place. They'll be back in action in a fortnight against either the beaten Ulster or Leinster finalists in a Round 4B Qualifier.

The home support amongst a crowd of 14,557 were happy with what they saw as the westerners - having gone 16 minutes without a score - finished the first half strongly with a devastating run of 2-3 without reply to lead by ten points, 2-9 to 0-5, at half time.

Kildare, who were poor, were just a point behind with ten minutes left before the break, 0-6 to 0-5, but goals from Evan Regan and Diarmuid O'Connor (each of whom registered 1-3 before the break) in the 29th and 34th minutes respectively put them out of their misery.

A brace of brilliant Diarmuid O'Connor points inside the opening four minutes had the winners off to a strong start and older brother Cillian added a point from a free after Lee Keegan's shot had rebounded off the Kildare woodwork.

A Cathal McNally strike in the eighth minute split further points from Diarmuid and Cillian (free) O'Connor as the Connacht champions of the last five years led by five points to one after twelve minutes. Morgan O'Flaherty replied a minute later with a sweet finish off the outside of his right boot.

Neil Flynn and O'Flaherty pointed either side of a Patrick Durcan effort and Flynn reduced the deficit to the minimum, 0-6 to 0-5, when he turned deftly to kick a lovely score. Mayo thought they should have had a penalty when Donal Vaughan went to ground as he tried to burst through the visiting defence but there was nothing doing.

Evan Regan's excellent free doubled the gap and the home supporters were baying for a penalty again when Diarmuid O'Connor was stopped after gathering a sublime Andy Moran pass, but their jeeps turned to cheers when the ball fell to Regan shortly afterwards and he slotted to the net from close range to make it double scores six minutes from the break, 1-7 to 0-5.

Regan's third successive score increased the home side's lead three minutes from the interval and his next goalbound effort was tipped over the bar by Mark Donnellan after Diarmuid O'Connor had brought his first-half tally to 1-3 with a stunning solo goal, beating four men before dispatching a low drive to the net.

Kildare had wind advantage in the second half but they must have known their goose was cooked when David Clarke saved Emmet Bolton's injury-time effort at the end of the first half.

After Flynn converted a Kildare '45', Keith Higgins got forward to add to the winners' tally before Diarmuid O'Connor cancelled out a score from half-time replacement Fionn Dowling. Regan turned to reply to a score from Keith Cribbin, another half-time Kildare sub, as the ten-point interval cushion remained intact after 46 minutes.

Johnny Byrne responded to the next Diarmuid O'Connor score but there was no chance of the Short Grass County getting back into this game, even when Boyle picked up a silly black card, with Flynn on target from the accruing free, and Dowling pulled back another off his left boot to reduce the arrears to eight with 13 minutes to go, 2-13 to 0-11.

Flynn (free) got the losers' fourth consecutive point but Jason Doherty announced his arrival from the bench with the winners' 14th point six minutes from time and then cancelled out a converted free from fellow substitute Alan Smith. Dowling's third point meant he could be more than satisfied with his efforts but there are few positives Lilywhite boss Cian O'Neill can take from this performance or result.

Substitutes Alan Freeman and Conor O'Shea completed the scoring as Mayo won at their absolute ease. Nobody will fancy facing Stephen Rochford's men in the last twelve - their opponents will be either Tyrone, Donegal, Westmeath or Dublin. However, one suspects that if they're going to face the Dubs this summer it won't be in the next round.