Connacht U21 FC final: Mayo stun the Rossies late on 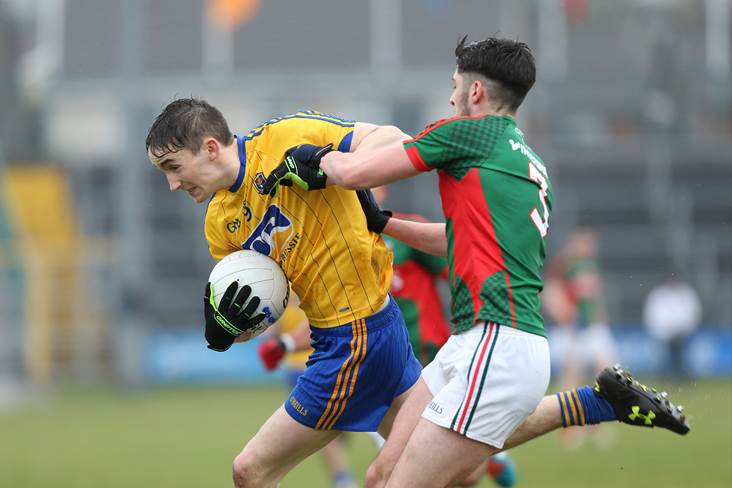 Mayo came from behind to beat Roscommon by 1-11 to 1-10 in an absorbing provincial decider played in wet conditions at Markievicz Park.

Liam Irwin's 57th-minute major had the winners ahead for the first time and Michael Plunkett subsequently sent over the winner in the second minute of injury time after Diarmuid Murtagh had equalised on the stroke of the hour. With 2,217 spectators looking on, the holders - bidding for three in a row - looked likely winners for much of the game but Mayo hung in there and finished strongly to wrest the JJ Fahy Cup from their grasp, land a 24th title at this level (and first in seven years) and seal an All-Ireland semi-final date with Dublin.

At the final whistle, the losers were left to rue the loss of full back Sean Mullolly to a black card; midfielder Cathal Compton's injury which forced him out of the action six minutes into the second half; and a glorious goal chance that came to nought before the break.

The defending champions had the better of the first half and were full value for their 1-6 to 0-4 interval advantage, with Murtagh notching 1-2 during that opening half-hour.

The Rossies got off to a dream start when Murtagh found the net on two minutes and points from Murtagh, Henry Walsh and Ronan Daly doubled the gap before Fionan Duffy finally got Mayo up and running in the eleventh minute. Ultan Harney slotted Roscommon's fourth point in the 14th minute and Murtagh got their fifth after Conor Loftus converted a free and Liam Irwin had knocked over a '45': 1-5 to 0-3. Daly and Irwin (free) registered the last two scores before the break and the short whistle sounded with five between them.

Upon the restart, Loftus (free) and Fergal Boland pointed for Mayo to reduce the arrears to three. In between, Mattie Flanagan denied Murtagh his second goal with a vital save. Loftus' third converted free in the 38th minute made it a two-point game but Daly's third point of the match steadied the losers on 40 minutes.

Murtagh (free) pointed from close range on the three-quarters mark in response to a Brian Reape finish but Irwin reduced the gap to two again with a fantastic free ten minutes from the end.

Duffy's second point was cancelled out by Brian Stack as the holders kept their noses in front but Irwin then pounced to fist home the second goal of the game to make it 1-10 to 1-9. Murtagh seemed to have earned his side a draw but Plunktett hit the winner in added time as Mayo took the silverware for the first time since 2009.