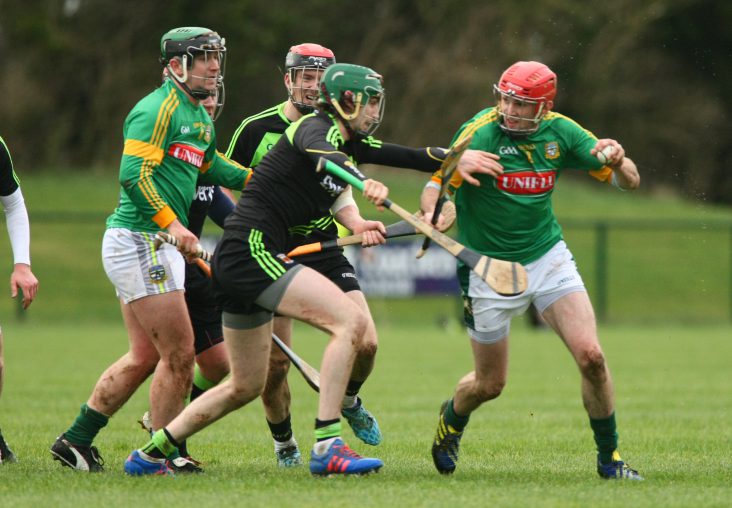 Mayo's outstanding centre back Gerard McManus closes in on Seanie Geraghty Meath during the NHL Division 2B game at Lomans Park Trim.

Mayo proved too good for Meath in this Allianz NHL Div 2B round two fixture at Trim on Sunday.

Mayo finished with four points to spare despite playing into a strong wind after the break to post their second win of the campaign.

JP Coen's men laid the foundations for their second win of the campaign in the first-half when posting 0-15 with the aid of a strong wind.

That was as good as it got for Martin Ennis' men who managed just two scores in the final quarter and never looked like erasing the interval deficit.

When Shane Boland completed the Mayo tally in the 67th minute, the nearly board read 0-19 to 1-9. Keith Keoghan's stoppage time goal - with assistance from Tom Clarke -

Backed by the strong wind blowing into the town end, Mayo made most of the running in the opening 35 minutes. However, Meath responded to Kenny Feeney's opening point with a goal.

It arrived four minutes in when Neil Heffernan's initial attempt was blocked before Sean Quigley (a late replacment for Timmy Hammersly) finished to the net. That score sustained Meath through the opening 15 minutes during which the sides were tied three times.

Meath's tactic of playing half-forward Damian Healy as in sweeping role behind midfield didn't appear to be working. Joseph McManus (three) and Sean Regan (two) were other to impress in the Mayo attack.

Jack Regan's 31st minute pointed free ended Meath's 17-minute scoreless spell. Mayo closed out the half with points from Feeney and wing-back Cathal Freeman, his second score of the game.

Mayo - winners over Donegal first time out - lead by six points at the break, 0-15 to 1-3. It didn't seem sufficient to sustain the men in mainly black jerseys. Their resolve proved otherwise.