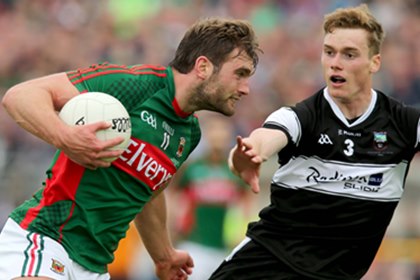 Aidan O'Shea of Mayo with Kevin McDonnell of Sligo
©INPHO

Mayo claimed their fifth successive Connacht crown with a crushing 6-25 to 2-11 defeat of Sligo at Dr Hyde Park.

Man of the Match Aidan O'Shea bagged 3-4 for the winners as the underdogs failed to compete with the powerful, skilful holders. 6-20 of the winning tally came from play and twelve different Mayo players registered today. They won by 26 points and posted the largest ever tally in a Connacht decider.

The winners retain the Nestor Cup and advance to an All-Ireland quarter-final, while Sligo will struggle to lift themselves for a Round Four Qualifier against Tyrone.

The first half was a procession as goals from Aidan O'Shea (2), Cillian O'Connor and Seamus O'Shea helped the winners take a massive 4-9 to 1-6 interval lead.

The holders made a dream start to lead by nine points inside seven minutes. Cillian O'Connor and Seamus O'Shea hit the net in the fourth and sixth minutes respectively and there were also points from O'Connor and his brother Diarmuid (2) as the underdogs were put to the sword early.

Niall Murphy opened Sligo's account after Cillian O'Connor converted a simple free and Adrian Marren swapped points with Aidan O'Shea; the gap went out to 13 by the 21st minute when the latter stroked the ball into the bottom left corner. Either side of Mayo's third major, Jason Doherty and Marren bagged points: 3-6 to 0-3.

Centre back Brendan Egan supplied the Sligo goal ten minutes from the break after Donal Vaughan and Marren (free) had exchanged scores but almost immediately Aidan O'Shea placed his second three-pointer into the roof of the net from close range. Substitute Barry Moran fisted a point to give the holders a 13-point cushion.

Doherty, Cillian O'Connor and Vaughan stretched the gulf upon the restart and Marren replied. Diarmuid O'Connor's brace bookended a Cian Breheny effort and Aidan O'Shea was content to take his point to leave sixteen between the teams.

Aidan O'Shea and Cillian O'Connor (free) pointed before the former completed his hat-trick of goals and Lee Keegan palmed to the net immediately to give the winners a whopping 24-point lead at the three-quarters stage, 6-16 to 1-8.

Mark Breheny converted a Sligo free and full forward Pat Hughes smashed their second goal to the net before the magnificent Aidan O'Shea took his tally for the day to 3-4. O'Connor (free) and sub Mark Ronaldson pointed either side of a fisted effort from Yeats County sub Eoin McHugh. Another replacement, Alan Dillon, supplied his side's 21st point.

Yet another sub, Patrick Durcan, got his name on the scoresheet and Chris Barrett became the fifth Mayo sub to register in a matter of minutes. O'Connor's injury-time free completed the rout after Mark Breheny and Ronaldson swapped scores. Mayo have won their first-ever five-in-a-row but bigger tests await them next month.

The Connacht champions will face either Donegal or Galway in their All-Ireland quarter-final.