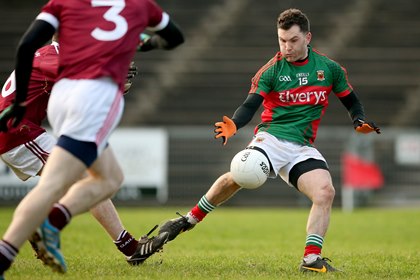 Mayo and their new management duo of Noel Connelly and Pat Holmes opened their Connacht FBD League campaign with a hard-earned 1-13 to 1-11 victory over NUIG at Elvery's MacHale Park.

In a game which had been evenly contested throughout, Adam Gallagher's late point sealed the win for the four-in-a-row Connacht champions. Castlebar Mitchel's forward Neil Douglas scored 0-4 from play before being off forced to retire injured in the second half.

The students had led by 1-7 to 0-8 at half-time thanks to Peadar O Griofa's goal, but a Mark Ronaldson green flag at the other end edged Mayo into a 1-8 to 1-7 lead, and they hung on for the win.

Mayo will face IT Sligo in their second outing in the competition next Sunday in Ballina.