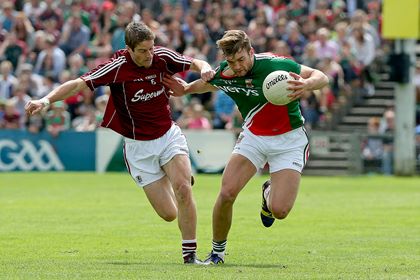 Galway's Gary O'Donnell with Aidan O'Shea of Mayo
©INPHO
History-makers Mayo retained the Nestor Cup with a routine 3-14 to 0-16 victory over Galway at Castlebar.

James Horan's side had goals from Kevin McLoughlin, Jason Doherty and Barry Moran as they eased past the Tribesmen and advanced to the All-Ireland quarter-finals once more.

The losers, meanwhile, will enter the Qualifiers at the Round Four stage, where they meet Tipperary.

The holders took advantage of some poor Galway finishing to march into a 1-9 to 0-5 half-time lead, with Keegan palming to the net in the 24th minute and Cilian O'Connor and Kevin McLoughlin striking eight first-half points between them.

Mayo led by two points to one after ten minutes. Galway registered first through a simple second-minute Shane Walsh free after Chris Barrett was penalised for an off-the-ball foul on Danny Cummins. Two-times Young Footballer of the Year Cillian O'Connor replied with a brace of excellent points - the first from play off his left foot after he gracefully weaved through the Galway defence, the second a superb free from the hands from 40 metres.

Points from Alan Dillon and McLoughlin stretched the gap and O'Connor nailed his second free after Michael Lundy had slotted the Tribesmen's second point. McLoughlin was on hand to make it 0-6 to 0-3 in the 20th minute after Doherty's effort had rebounded into play off the right upright.

Alan Mulholland introduced former Kildare ace James Kavanagh into the fray in an attempt to spark some life into his team but the deficit increased to seven points when O'Connor effortlessly cut along the right end-line and placed a precise pass into the path of wing back Higgins, who palmed the ball past Manus Breathnach to the back of the net from close range.

Walsh and O'Connor popped over frees from in front of the posts at either end. Galway needed scores but three first-half wides each from Cummins and full forward Eddie Hoare undid a lot of very good approach work. Paul Conroy supplied their fourth point on the half-hour but Gareth Bradshaw's shot same back off an upright. At the other end, Dillon hit Mayo's third wide.

O'Connor's fifth point was followed instantly by McLoughlin's third and it would have been even worse for the challengers at the short whistle but for wides from Dillon and O'Connor. Cummins finally got on the scoresheet with a lovely finish deep into first-half stoppage time to reduce the arrears to seven points at the interval.

Galway made a purposeful start to the second half and were decidedly unfortunate when Walsh smashed a shot off the underside of the crossbar within seconds of the restart. The centre forward retrieved possession from the rebound and took his point.

Captain Conroy also came within inches of raising a green flag when his arrow flew over the bar and Bradshaw's inspirational score closed the gap to four points, 1-9 to 0-8, with four second-half minutes played.

Mayo - who thought they should have had a penalty when Keegan went to ground as he bore down on goal - came back with an excellent point from the outstanding Doherty; Conroy added his third with a sweet left-foot strike and Sean Armstrong was introduced for the last 27 minutes.

An O'Connor free into the swirling breeze curled delightfully between the posts and Keegan had the freedom of MacHale Park as he ghosted in unnoticed and gathered a pass before driving a fierce shot off the top of the black spot and over the bar.

It seemed only a matter of time and, right enough, the second Mayo major materialised in the 47th minute when Doherty gave Breathnach the eyes and rolled a calm left-footed shot along the deck to the net to make it double scores, 2-12 to 0-9.

A brace of Walsh frees and an Armstrong point left the two goals separating the sides at the three-quarters stage. O'Connor, who was terrorising rookie Donal O'Neill, took his tally to 0-7 with an effortless finish from play and Walsh replied from a 55th-minute free from the hands.

A minute later, Barry Moran put the game well and truly to bed when he got on the end of a three-man hand-passing move to fist the ball over the line via the underside of the crossbar. Galway responded with Walsh's seventh point and they were correctly awarded a penalty when Moran (black card) dragged Conroy down.

But Robert Hennelly got down brilliantly to his right to execute a superb save from Walsh. Conroy's fourth point from play left seven between the teams with eight minutes left.

O'Connor's next converted free arrived in the 65th minute and Armstrong replied quickly with a lovely score. Breathnach foiled McLoughlin from point-blank range and O'Connor's resultant '45' drifted wide in the wind.

The last time Mayo won four provincial titles in succession was 1951; they went on to add the Sam Maguire Cup that year.