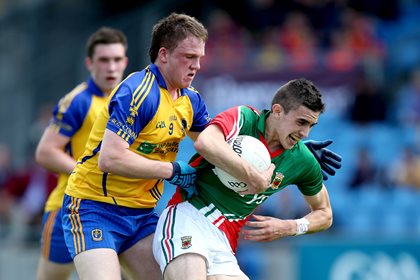 Brian Reape scored 1-6 in a man of the match display as All-Ireland champions Mayo produced a turbo-charged finish to retain their Connacht MFC title at Elvery's MacHale Park.

Challengers Roscommon recovered from a poor start to take the lead for the first time entering the final quarter, but Enda Gilvarry's charges finished with a flourish to go into the All-Ireland series as Tom Kilcoyne Cup holders. Roscommon also progress to the All-Ireland quarter-finals as provincial runners-up.

The holders raced into an early 1-2 to 0-0 lead thanks to points from Reape (free) and Conor Byrne, and a goal from team captain Cian Hanley. Roscommon replied with three points in-a-row from Hubert Darcy, Noel Gately and a fisted Fergal Lennon effort, only for Gary Boylan and Reape to reply and leave Mayo 1-4 to 0-3 ahead.

A brace of Smyth frees left the minimum between the sides, 0-10 to 1-8, early in the second half before Reape responded for the home side. Sub Conor Kilkenny marked his arrival with another Mayo point, but a trio of points from Gately, Luke Carthy and Darcy gave the Rossies the lead for the first time, 1-10 to 0-14.

However, Mayo's response couldn't be any more emphatic as they reeled off 1-6 without reply. Full forward TJ Byrne restored parity before fellow inside forward Reape put the hosts back in the driving seat with a superb 51st minute goal which followed a lightening break out of defence.

Reape continued his tour de force with another brace of points before Fionan Duffy and TJ Byrne completed the scoring.