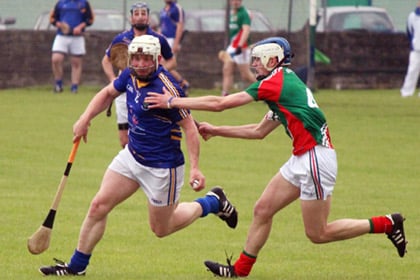 Mayo hurlers made the long journey to Arklow on Saturday to play Wicklow in the quarter final of the Christy Ring Cup. Most observers outside the county did not give the Red and Green any chance of victory and they were 7/2 outsiders with the bookies earlier in the day. On paper, at least, Mayo didn't have much of a chance as they had suffered a 12 points defeat in the same venue last year, but Mayo are a different proposition this year. This young Mayo side have been working very hard since the start of the year under the tutelage of Christy Phillips, Leo Connor and Austin Kenny and this has resulted in a greater confidence and maturity in the players on and off the field.

At the start of the match conditions were perfect for hurling, with dry calm conditions, which suited the young and nippy visitors. Mayo raced into a four points to two lead after 15 minutes with pointed frees from Kenny Feeney (2) ably assisted by Fergal Boland and Keith Higgins from play. However as playing conditions began to deteriorate, with heavy rain falling, the more physical home side began to get a foothold in the match and had six unanswered points from Mickey Lee (3 frees), Andy O'Brien, Wayne O'Gorman and Christy Moorehouse to lead eight points to four after 30 minutes of play. Mayo defended valiantly during this period of Wicklow dominance and in particular the full-back line of Adrian Brennan, Aiden Connolly and David Kenny were heroic in restricting the home side to just three points from play. In the last five minutes of the half Mayo got back in the match with a pointed Feeney free and a spectacular effort from All-Star Keith Higgins, to leave the half-time score Mayo 0-6, Wicklow 0-8.

On the resumption playing conditions improved considerably as the rain was replaced by warm sunshine. The home side were first off the mark with another Mickey Lee pointed free but that was as good as it got for the hosts. Mayo management introduced Stephen Hoban and he had an immediate impact with an excellent point to begin a sustained period of dominance for the visitors.
The turning point of the game came ten minutes into the second half as Mayo wiped out the deficit in one attack. Brian Hunt broke down the left to hit it hard off the ground to beat Ted Kennedy and turn the tie on its head. Mickey Lee levelled shortly after but Mayo were starting to take control as Keith Higgins, Hoban, Padraic O'Flynn, Derek McDonnell and the ever reliable Feeney stretched their lead. Mayo led 1-15 to 0-12 with five minutes remaining and Wicklow pushed hard for the goal that would reignite their fading challenge. They were awarded a dubious free for a challenge on Andy O'Brien but Mayo keeper Donie O'Brien got the slightest of touches to deflect it over the bar to keep his goal intact. Shortly after Referee Sean Cleere sounded the final whistle to herald jubilant celebrations by the travelling Red and Green army. The final score line read, Mayo 1-15, Wicklow 0-14.

This was an historic victory for Mayo hurlers, despite the odds being stacked against them. Cool heads are now required as Mayo will face the challenge of championship favourites Kerry next weekend with the venue being decided based on a draw by Croke Park on Monday. Indeed in the midst of the elation, Keith Higgins reminded the squad that nothing has been won yet and that the focus now has to be on winning the semi-final. Keith's desire to be part of the team again next weekend was very evident after the game, even though he has enjoyed much success on the football field over the past decade Mayo hurling is very much in his heart.

Mayo had many heroes on this historic day, the aforementioned full back line of Brennan, Connolly and Kenny were very dominant throughout, Padraic O'Flynn was superb at centre-back, Brian Higgins and Ciaran Charlton chased and harried at midfield, while forwards Kenny Feeney, Stephen Hoban, Brian 'Deano' Hunt and Keith Higgins took their chances with style and panache. Mayo's best performer on the day was dual All Ireland winner from last year, David Kenny at corner back. Kenny held Wicklow danger man Andy O'Brien to one point from play, no mean achievement as the same player scored 3-10 in the corresponding clash last year.

Mayo now face Division 2A Champions Kerry in the semi-final next weekend, given their outstanding performance in Arklow, they will have nothing to fear.