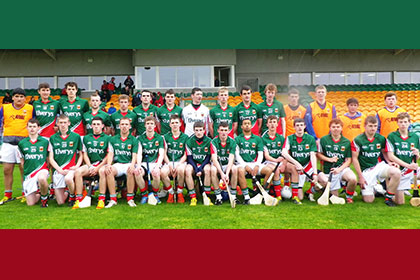 Mayo Minor hurlers, and a large group of travelling supporters, made the long journey to Ballinamore on Saturday last for the All Ireland Minor C Hurling Final at Sean O'Heslin Park. After coming through group stages of the competition in impressive style, expectations were high that this young minor team could show the way for the other two Mayo teams competing in Croke Park later this month.

Even though conditions on the day were less than perfect, with heavy overnight rain, Mayo played superb hurling from the first to the final whistle. Early points from team Captain Fergal Boland had Mayo in the lead 5 points to 3 after 15 minutes, but worryingly for Team Manager Brian Finn and his energetic young selector John Regan, all of Mayo's points were from placed balls. But they need not have worried as in the 2nd quarter points from Corey Scahill (2), Morgan Lyons, Conor Canty and Sean Mulroy gave Mayo an 11 points to 5 half-time lead.

Monaghan played with the aid of the breeze in the 2nd half but an inspired half-time substitution paid instant dividends with replacement player Jason Coyne scoring almost directly from the throw-in to maintain Mayo's momentum. Coyne scored another point in the 15th minute and was central to the Mayo goal on 20 minutes when he crossed from the right for Castlebar's Corey Scahill to dispatch the sliotar to the Monaghan to but the result beyond doubt with Mayo in control, 1-14 to 0-7.