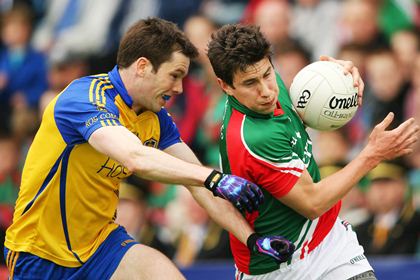 Mayo are just 70 minutes away from completing a hat-trick of Connacht SFC titles for the first time since the early 1950s after cantering to victory over Roscommon at MacHale Park.

Having demolished Galway by 16 points in the first round, this was another impressive performance by James Horan's men who will go into the provincial decider against either Leitrim or London on July 21 as the hottest of favourites. The gulf in class between Division 1 and 3 was clear for all to see as James Horan's men proved far too strong for a Roscommon team who briefly led early on through a Donie Smith point.

But that was as good as it got for the visitors who were outclassed in every facet of the game thereafter. Sharper and physically stronger, Mayo's often-criticised attack displayed radar accuracy in the opening 35 minutes. They shot 13 points from 14 attempts to go into the break holding a commanding 0-13 to 0-4 lead.

The second half was a complete non-event as the 19,867 attendance got poor value for their admission fee. Such was Mayo's dominance that four of their defenders scored, while Alan Freeman and Kevin McLoughlin didn't put a foot wrong from frees in the absence of the injured Cillian O'Connor.

By contrast, Roscommon manager John Evans faces a difficult task to pick his demoralised players up for the All-Ireland qualifiers. On this evidence, they are unlikely to make much of an impact.

U21 star Smith shot the visitors into an early lead on his championship debut, but it proved to be a false dawn as Mayo gradually took a firm grip on proceedings. Before they opened their account, though, Smith missed a simple free, while Alan Dillon fisted against the Roscommon crossbar after connecting with David Clarke's undercooked '45.

Kevin McLoughlin eventually got the hosts off the mark with a 12th minute point. Centre back Donal Vaughan immediately added a second before a McLoughlin free made it 0-3 to 0-1.

Karol Mannion replied for the Rossies, but the midfield dominance enjoyed by the O'Shea brothers, Seamus and Aidan, meant the underdogs were on the back-foot for the rest of the game. Alan Freeman converted a free he won himself before notching his first from play after a brilliant catch.

Keith Higgins then came up from corner back to jink his way past three Roscommon defenders for the score of the game. Last year's All-Ireland runners-up were purring now as a foul on Alan Dillon by Karol Mannion yielded another McLoughlin free.

Roscommon then hit two points in-a-row from 2006 All-Ireland minor winners Kevin Higgins and Conor Devaney to leave three in it, 0-4 to 0-7 after 25 minutes. Both were well-worked scores with midfielder Higgins pointing after a patient build-up, and Michael Finneran, Cathal Cregg and David O'Gara combining to set up Devaney for the second.

But it wasn't long before normal service resumed. Mayo wing back Colm Boyle kicked an excellent individual score before Kevin McLoughlin slotted over his fourth point from a free which resulted from a foul by Niall Carty on Alan Freeman. The Roscommon full back received a yellow card for his troubles.

Conor Devaney had Roscommon's seventh wide, but Mayo were much more clinical at the opposite end as Freeman sent over a 40-metre free and Richie Feeney also posted a fine long-range effort. Freeman turned provider for Mayo's 12th point from Alan Dillon before Enda Varley became the last member of their full forward line to score on the stroke of half-time.

Roscommon introduced Cathal Shine and Enda Smith in place of Donie Smith and David O'Gara for the second half in a bid to up their scoring return, but it continued to be one-way traffic as Aidan O'Shea extended Mayo's lead to 10 points within 10 seconds of the restart.

Three minutes in and the game already won, Mayo boss James Horan decided to replace his captain David Clarke, who had a slight knock, with Kenneth O'Malley. The sub-goalkeeper's first contribution was the kick a '45 wide.

Roscommon full forward Senan Kilbride registered his first point from a free, but there was no respite for John Evans' men as Alan Dillon fed Colm Boyle for his second point. Andy Moran entered the fray in the 44th minute in place of Cathal Carolan and immediately set up Lee Keegan for a point - the Westport clubman becoming the third Mayo half back to get on the scoresheet.

Moran then scored a beauty off the outside of his boot as the Nestor Cup holders threatened to run riot. Substitute Enda Smith had Roscommon's sixth point before Donie Shine - who was unable to start due to injury - replaced Cathal Cregg with 20 minutes remaining.

Kevin McLoughlin knocked over another free and Darren Coen marked his arrival with a nice point. A foul on Aidan O'Shea on the 20-metre line produced McLoughlin's sixth point.

Enda Smith scored his second point before Mayo had to settle for a minor from Darren Coen after Darren O'Malley had kept his goal intact with a great save to deny Richie Feeney. The champions didn't score in the last nine minutes, which included one minute of injury-time, but it mattered little and it was left to Senan Kilbride to put a better complexion on the scoreboard from a Roscommon perspective with two late frees.